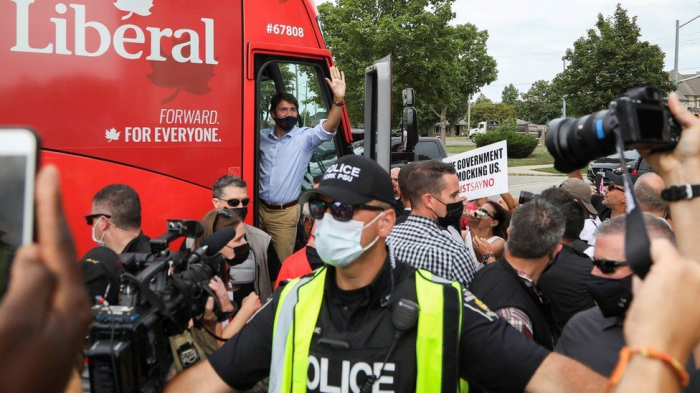 Justin Trudeau has been forced to cancel an election rally after a crowd of angry protesters ambushed the event.

The Canadian prime minister had been set to address supporters in Bolton, Ontario, but the event was called off over security concerns.

Dozens of protesters gathered at the rally and shouted obscenities before Mr Trudeau could speak.

The Liberal prime minister is hoping to secure a majority in a snap general election he called earlier this month.

But in recent days his canvassing efforts have been dogged by protests against Covid-19 vaccines and government restrictions.

At Friday's rally, his campaign bus had to be escorted away by police after the event was cancelled following a two-hour delay.

The 49-year-old said the protests showed how the pandemic had been hard on everyone.

He said the event had been cancelled because organisers could not ensure people's safety.

Earlier on Friday, crowds had disrupted the prime minister's visit to a bakery in the town of Nobleton, with some jeering and holding signs reading "Trudeau Treason".

On Wednesday, on a visit to British Columbia, he was met by anti-vaccine protesters, with some shouting they would refuse the Covid jab.