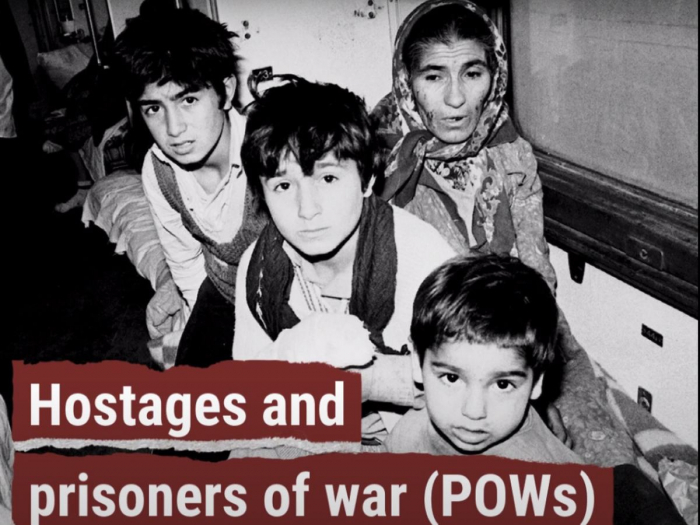 The Consulate General of Azerbaijan in Los Angeles produced a short film in English on Azerbaijani hostages, missing persons and prisoners of war, AzVision.az reports citing the Consulate.

The film mentions that in the early 1990s Armenia invaded 20 percent of Azerbaijan’s sovereign territory and expelled 800,000 Azerbaijanis from their ancestral villages and towns. It states that amid the ethnic cleansing of invaded territories, Armenian troops often besieged Azerbaijani villages, killing many civilians and taking others as hostages. In this vein, the film shows a rare video of the California-born Armenian terrorist Monte Melkonian and his accomplices in Kalbajar in April 1993, who giggled and performed celebratory gunfire, as they besieged an Azerbaijani village and threatened the civilians.

It is mentioned that Azerbaijani hostages and prisoners of war (POWs) were subjected to horrendous cruelty in Armenian torture camps.

Around 4,000 Azerbaijanis are still missing, including 719 civilians, among them, 326 elderly, 267 women and 71 children, and their fate remains unknown.

The film notes that after Azerbaijan liberated its territories in 2020 from Armenia’s 30-year long illegal occupation, the first mass grave of Azerbaijani civilians, who were murdered by Armenian troops, was found in the liberated district of Kalbajar.

In the end, the film stresses that Armenia still refuses to provide any information about 4,000 missing Azerbaijani civilians and soldiers.

The film has also been translated into other official languages of the United Nations (Arabic, Chinese, French, Russian and Spanish) and disseminated on social media on the occasion of the International Day of the Disappeared (August 30).

Considering the importance of short films in the current social media age, the Consulate General has produced 26 films on different topics about Azerbaijan since 2019. Some of them have been translated into other languages too.