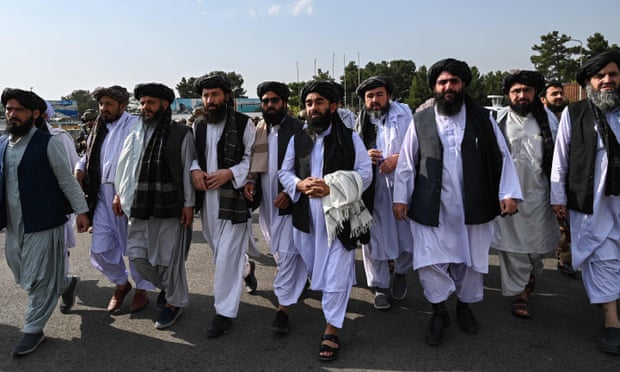 The Taliban are expected to announce a new government in Afghanistanwithin hours, as chaos in the country deepened and aid experts warned of imminent economic collapse.

More than two weeks after the Islamist militia seized control, sources told Agence-France Presse that the cabinet could be presented after morning prayers on Friday and Ahmadullah Muttaqi, a Taliban official, said on social media that a ceremony was being prepared at the presidential palace in Kabul.

The private broadcaster Tolo said an announcement was imminent. The movement’s supreme leader, Haibatullah Akhundzada, is expected to have ultimate power over a new governing council, with a president below him, Taliban officials have said.

The Islamist militants governed Afghanistan through an unelected leadership council, brutally enforcing a radical form of sharia law, from 1996 until 2001, when they were ousted by US-led forces. Since their return, they have promised a softer brand of rule.

However, the US, the EU and others have cast doubt on the group’s assurances, saying formal recognition of the new government – and any economic aid that would follow – will depend on the Taliban’s actions in power.

Haibatullah, a religious scholar from Kandahar whose son was a suicide bomber, is expected to play a theocratic role similar to that played by Iran’s supreme leader. Mullah Abdul Ghani Baradar, a co-founder and deputy leader of the movement who was imprisoned in Pakistan, is likely to be appointed head of government.

Other Taliban officials expected to hold senior positions include Sirajuddin Haqqani, another deputy leader, and Mohammad Yaqoob, the son of the Taliban’s founder Mullah Muhammad Omar, who died in 2013.

The new government will face enormous challenges. The UN has warned of a looming humanitarian catastrophe across the country of 40 million people amid a severe drought, growing food insecurity and the upheavals of a 20-year war that forced thousands of families to flee their homes.

Mary-Ellen McGroarty, the World Food Programme’s country director in Afghanistan, told Reuters: “In the current context there are no national safety nets … Since 15 August when the Taliban took over, we have seen the crisis accelerate and magnify with the imminent economic collapse that is coming this country’s way.

“The situation that we have unfolding at the moment is absolutely horrendous and could morph into just a humanitarian catastrophe,” she said, adding that since the Taliban takeover civil servants’ salaries were not being paid, the currency had depreciated, and banks have limited weekly withdrawals to $200.

Food stocks distributed by the UN are likely to run out for much of the country by the end of September, the organisation’s humanitarian coordinator for Afghanistan has said, with shortages of food and other necessities already widely reported.

Hours-long queues have formed outside banks and prices in Kabul’s bazaars have soared. In one spot of brighter news, however, Western Union said on Thursday that it was restarting money transfer services to the country; many Afghans rely on remittances from relatives abroad to survive.

Afghanistan desperately needs money, but despite assurances from the new Taliban-appointed central bank head, the Taliban are unlikely to get swift access to roughly $10bn (£7.25bn) in assets mostly held abroad by the Afghan central bank.

In a sign of where Afghanistan may now turn for international assistance, Zabiullah Mujahid, an official spokesman for the new regime, told the Italian newspaper la Repubblica that China was “our main partner and represents a fundamental and extraordinary opportunity for us as the Chinese government is ready to invest and rebuild our country”.

Mujahid said the Taliban “care a lot about the ‘one belt, one road’ project. We own rich copper mines, which, thanks to the Chinese, will be modernised. Finally, China represents our ticket to the markets around the world.”

Asked about the Taliban’s relationship with Russia, he said relations with Moscow were “mainly political and economic. Russia continues to mediate for us and with us to create the conditions for an international peace”.

The Taliban have promised to allow safe passage out of the country for any foreigners or Afghans left behind by the massive airlift that ended with the withdrawal of the last US troops on Monday, but Kabul airport remained closed on Thursday.

Domestic flights from the airport, which will be vital for humanitarian operations, would resume on Friday, Al Jazeera reported, adding that while a Qatari technical team was assessing damage, the return of international air traffic that would allow further evacuations would take “some time”.

Meanwhile, Taliban forces and fighters loyal to the resistance leader Ahmad Massoud continued to fight the Panjshir valley north of Kabul, with each side claiming it had inflicted heavy casualties.

A Taliban spokesman, Zabihullah Mujahid, said Taliban fighters had entered Panjshir and taken control of some territory. The National Resistance Front of Afghanistan rebel grouping, however, said it had full control of all passes and entrances and had driven back all incursions.