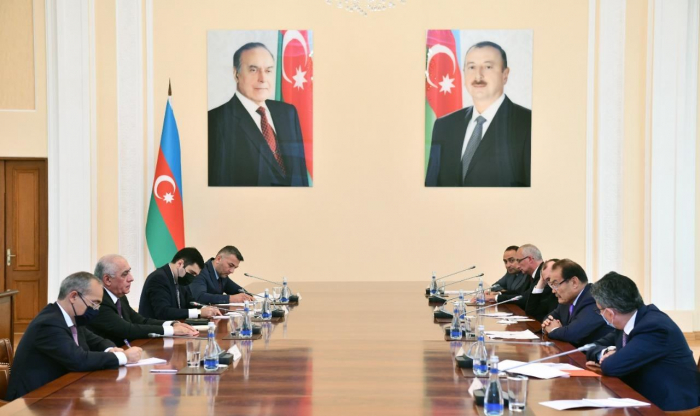 Azerbaijan’s Prime Minister Ali Asadov met with a delegation headed by the Secretary-General of the Cooperation Council of the Turkic-speaking states (Turkish Council) Baghdad Amreyev on September 10, AzVision.az reports citing the press service of the Cabinet of Ministers of Azerbaijan.

In the course of the meeting, Asadov noted with satisfaction that the Turkic Council, having strengthened, became an important international organization, and over the past period, its prestige in the world has increased.

Azerbaijani PM also noted that Azerbaijan effectively cooperates with Turkic-speaking states both in a bilateral format and within international organizations.

Asadov also expressed gratitude to the Cooperation Council of Turkic-speaking states and the organization’s member countries for supporting the sovereignty and territorial integrity of Azerbaijan, as well as for the political and moral support provided to Azerbaijan during the Second Karabakh War.

The prime minister stressed the importance of unequivocal support from fraternal Turkey from the first days of the war.

During the meeting, the parties stressed that the opportunities were opened up following the liberation of the Azerbaijani lands (from Armenian occupation), and noted the importance of the Zangezur corridor.

The official assessed the extraordinary summit of the Turkic Council dedicated to the fight against the coronavirus pandemic held in 2020 by the initiative of the president of Azerbaijan as another manifestation of the solidarity of Turkic-speaking countries.

The holding of the 10th meeting of the economy ministers of the Turkic Council and the Turkic Business Forum in Baku was highly appreciated. It was especially noted that the forum's dedication to the restoration of the liberated territories of Azerbaijan is of great importance.

The sides expressed confidence that the decisions taken within the events and the signed documents will contribute to the expansion of cooperation between the member countries of the Turkic Council, especially in the trade, economic and investment fields.