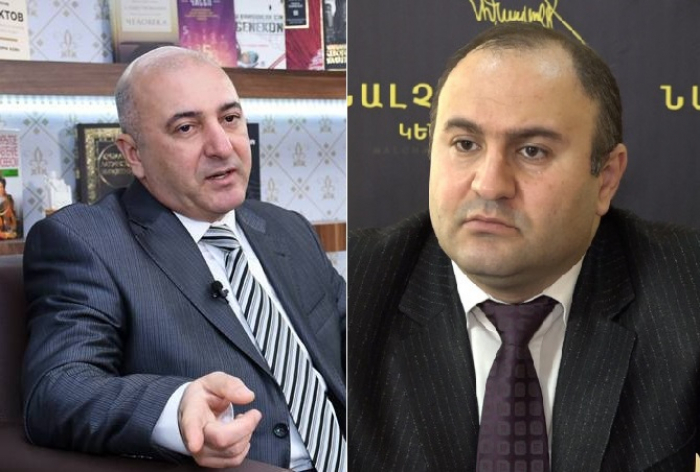 Armenian military expert Davit Jamalyan completely distorted the events of the Second Karabakh War during a press conference on September 29. Before responding to the expert’s views, let’s take a look at absurd allegations made by him.

1) Jamalyan alleged that “as of November 9, 2020 [November 10 – when a trilateral statement was signed], the offensive resources of the Azerbaijani side were almost used up”;

2) Furthermore, Jamalyan said “the Azerbaijani Army was allegedly unable to break through the Armenian line of defense on the first day of the war and Armenia’s frontal positions in the south-eastern direction have been quite stable for about a week”;

3) In conclusion, Jamalyan made another absurd claim that “if there was a shift of power in Armenia on November 9 and we received a little support from ally Russia and friendly Iran, I assure you that we would have a completely different picture.

The tragedy is that on November 9, the territories that Azerbaijan could never have been regained were handed over. Even Azerbaijani President Ilham Aliyev admitted that the Azerbaijani side would have a problem in Kalbajar in a few weeks since winter was approaching.”

I might not even respond to Jamalyan as I do not have time to answer every absurd statement. However, since Jamalyan was an adviser to the then-defense minister, Khojaly murderer, Seyran Ohanyan, I owed to respond to him. So, I tried to answer Jamalyan’s absurd claims with figures and facts. The figures speak for themselves.

First of all, I’d like to respond to the claims alleging that the offensive resources of the Azerbaijani side were “almost used up”. At the end of the war, the losses of the 135,000-strong Azerbaijani Army amounted to 2,900, with the number of the wounded standing at 12,000. There was no need to involve in the hostilities the reservists of the Combined Arms Army in Nakhchivan, the 3rd Army Corps, the State Border Service and the Interior Troops, who were undergoing training outside the combat zone. More than 100,000 Azerbaijani citizens were waiting for their turn in mobilization departments to voluntarily join the army. Azerbaijan lost about 5-10 percent of its armored vehicles, artillery units, defense systems, manned and unmanned aircraft.

Armenia’s 45,000-strong army suffered 5,000 deaths, with the number of wounded hitting 11,300. There were more than 10,000 deserters in the Armenian army. In other words, Armenia’s losses in manpower amounted to about 60 percent. There was no queue among Armenian citizens willing to voluntarily go to war.

During the war, 366 tanks of the Armenian army were destroyed and captured as war trophies. However, the Armenian army was possessing 220 tanks. An additional 146 tanks are believed to have been brought to Armenia during the war and hidden in Karabakh to keep them out of the control of international organizations.

Also, during the war, 10 firing devices and radar systems of S-300 anti-aircraft missile systems, 352 artillery pieces of various calibers, 97 Grad, 4 Smerch, 2 Uragan, 1 TOS, several Tochka-U and Elbrus missile systems, 22 unmanned aerial vehicles, 5 Su-25 fighters, as well as 50 “Tor”, “Osa”, “Kub” and “Krug” anti-aircraft missile systems of the Armenian army were destroyed. These figures show that the losses of the Armenian army in the war range from 30 percent (in manned aircraft) to 170 percent (in tanks).

- Can you point out another fact that the side launching an offensive in the mountainous and high-mountainous areas suffers 6-7 times fewer losses than the side with a well-prepared line of defense?

- How were about 400 special forces, armed only with small arms and several portable Spike anti-tank systems, of the “exhausted” army, without using artillery units and armored vehicles, able to liberate the city of Shusha guarded by over 3,000 Armenian soldiers? What kind of resistance by the Armenian army can we talk about if the war continues? At least, do not close your eyes to the bodies of hundreds of Armenian soldiers abandoned on the streets of Shusha!

Some international experts and a couple of Armenian experts have shared their views about the liberation of Shusha city. US, German, Japan and other international media have published articles about it. Although these operations have created innovations in world military history, Jamalyan's latest statements were simply blindness.

How can Jamalyan explain the fact that 65 times fewer Armenian servicemen went missing on the battlefield during the operation, that the remains of up to 1,700 Armenian bodies were found in various parts of Karabakh, and that the "search operation for bodies" still continues 10 months after the end of the war?

Regarding the inability of the Azerbaijani Army to break Armenia’s defense line on the first day of the war, and the stability of the Armenian front line in the south-east for about a week, I would like to bring to Jamalyan's attention: Not only during the first week of the operation, but even in the first hours, the Azerbaijani Army has broken the defensive barriers created by you and child killer Seyran Ohanyan. On September 27, at 14:00 the units of the Azerbaijani Army liberated Garakhanbeyli, Garvand, Kand Horadiz, Yukhari Abdurrahmanli, Boyuk Marjanli and Nuzgar villages of Fuzuli region in the south, as well as the heights located in the north-east in Aghdara and Murovdagh direction from Armenian occupation. In other words, in the first 6 hours of the counterattack, Azerbaijan took control of both the Jabrayil-Fuzuli road and the Basarkechar-Kalbajar road by liberating 6 villages and 2 heights.

If Jamalyan sees the restriction to the Basarkechar-Kalbajar road by Azerbaijani Army, Armenia's difficulty in attracting additional forces to the operations, minimizing its maneuverability in both directions, and the destruction of 800 Armenian servicemen in the direction of Jabrayil as “stability of the contact line”, then he needs psychological assistance.

Jamalyan said that “if the Armenian leadership was changed on November 9 and we could get assistance from Russia and Iran, the situation would be different. On November 9, the territories which could not be returned by Azerbaijani Army were handed over.” Jamalyan also claimed that “Azerbaijani President confessed that if all those events continued for several weeks, it would be impossible to liberate Kalbajar.” I would like to emphasize that Iran and Russia continually helped Armenia. However, Armenia could not withstand.

Both sides had to suffer losses as a result of the liberation of Kalbajar. However, given previous statistics and the number of bodies and equipment left behind by the Armenians during the withdrawal, there is no need to discuss which side would suffer losses on a larger scale.

Neither the harsh climate nor the high mountainous terrain would stop the Azerbaijani Army, which reached its highest moral and psychological advantage as a result of the liberation of Shusha. As a result of President Ilham Aliyev's far-sighted policy and excellent leadership, the Azerbaijani serviceme destroyed the 30-year-old "invincible Armenian army" myth in just 44 days, along with the 200-year-old idea of a "Greater Armenia ''. The "heroic Armenian commanders'' left the helpless Armenian servicemen on the battlefield and fled. Neither those commanders, nor their relatives wanted to die for Karabakh.

During the war, all citizens in Azerbaijan stood up to support the Army, while the Armenian army had 1,500 deserters in the first five days of the war and 10,000 in the end. Excluding those killed and wounded by November 10, 50 percent of the Armenian army were deserters. Today, Armenia has the first deserter army of the 21st century.

In an interview with an Azerbaijani journalist, Armenian military expert V.Ambartsumyan admitted that 80 percent of his army had been destroyed. Possibly, Jamalyan had no information about it. In fact, no one doubted it, the Armenian side simply did not admit the fact. If anyone has doubts about what the Armenian expert said, that person should try to count the Armenian servicemen and equipment destroyed in the videos released over the past year, look at the statistics of deserters and visit the “Yerablur” cemetery in Yerevan and the “Military Trophy Park” in Baku.

It was doubtful that the "unique" Armenian army consisting of deserters of the 21st century would be able to withstand the Azerbaijani Army in Khankendi and Kalbajar for even a few hours. Otherwise, the Prime Minister of Armenia Nikol Pashinyan would not have signed the act of capitulation in an unknown place, perhaps in the sanitary junction.

If someone in Armenia wants to know about the capabilities of the Azerbaijani Army, the truth of the facts and arguments, then let them try their luck again to question the existence of their country.

Adalat Verdiyev is a military expert.