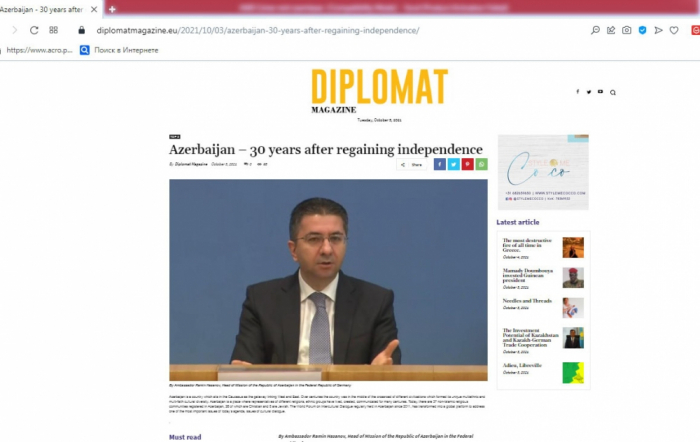 The Netherlands-based Diplomat Magazine has published an article by Azerbaijani Ambassador to the Federal Republic of Germany Ramin Hasanov headlined “Azerbaijan – 30 years after regaining independence.”

The article reads: “Azerbaijan is a country which sits in the Caucasus as the gateway linking West and East. Over centuries the country was in the middle of the crossroad of different civilizations which formed its unique multiethnic and multi-faith cultural diversity. Azerbaijan is a place where representatives of different religions, ethnic groups have lived, created, communicated for many centuries. Today, there are 37 non-Islamic religious communities registered in Azerbaijan, 26 of which are Christian and 8 are Jewish. The World Forum on Intercultural Dialogue regularly held in Azerbaijan since 2011, has transformed into a global platform to address one of the most important issues of today’s agenda, issues of cultural dialogue.

Emerged as an independent republic in 1918, Azerbaijan was the first democratic republic in the Muslim East, 23 months between May 1918 and April 1920, but within a short period of time became one of the world’s most progressive countries by providing universal suffrage to all of its citizens. The National Council (Parliament) of the Democratic Republic of Azerbaijan, composed of the representatives of all the layers of population and minorities, operated for just 17 months, but was able to adopt around 230 legislative acts, including the law granting women the right to vote and to participate in the political life of the country. Azerbaijan regained its independence on October 18, 1991, after the collapse of the Soviet Union, and declared itself the political and legal successor of the Democratic Republic of Azerbaijan.

The challenges which emerged across the space of the former Soviet Union in the early 90’s did not pass by Azerbaijan at the early period of its independence. As a result of territorial claims and the following military aggression by Armenia, 20 % of the territories of Azerbaijan were occupied, about one million Azerbaijanis became IDPs and refugees.

However, it was the properly shaped and balanced policy under the leadership of Heydar Aliyev, which helped the country become the region’s most successful country. Azerbaijan, in order to fund the development and promote the regional stability and growth, has opened its oil and gas industry to foreign participation which brought international investors and guaranteed the development of the county’s economy.

Just like its culture, Azerbaijan’s foreign policy is very diverse. Azerbaijan maintains close ties both with Muslim countries, Christian West as well as with Israel at the same time. Azerbaijan has proved itself as a reliable partner of the West while maintaining good, friendly relations with Russia and Iran, keeping the flow of energy and trade between Asia and Europe.

Today, Azerbaijan plays a crucial role in providing Europe’s energy security by helping to diversify its oil and gas supply resources. Azerbaijan, which accounts for more than 70 percent of the economy of the South Caucasus, is the main initiator of important political and economic cooperation platforms in the region. Energy, infrastructure and other projects implemented with the active participation of my country play an important role in the development of the region as a whole.

Thus, through its State Oil Fund founded in 1999 with a purpose to maintain macroeconomic stability and to direct oil revenues to the development of other priority areas, the Republic of Azerbaijan has managed to implement local and major regional projects. The country made major investments on its energy infrastructure and as a result, electricity importing country became electricity exporter.

Besides energy sector, Azerbaijan heavily invested in its transport infrastructure and as a result became a major regional transport hub: the country links the East to the West with highways, as well as Baku-Tbilisi-Kars railway, which was constructed in 2017 and considered an important part of the Silk Road. The country also hosts the North–South corridor which links the Northern Europe, Russia, Azerbaijan, Iran and India.

Despite Azerbaijan had tremendous success in every aspect of statehood, the conflict with neighboring Armenia remained unsolved until the fall of 2020. The Minsk Group of the Organization of Security and Cooperation in Europe co-chaired by the USA, Russia and France, was tasked to deal with the conflict. However, over the years Minsk group’s work didn’t produce any positive result. Instead, impunity only increased the Armenia’s aggression and militaristic polices under the slogan of “new war for new territories” which led to the full-scale war on September 27, 2020.

Within 44 days, Azerbaijan liberated its territories from Armenian occupation, thus ensuring the restoration of its territorial integrity in conformity with the four UN Security Council resolutions adopted in 1993, which demanded immediate, complete and unconditional withdrawal of Armenian forces from all the occupied territories of Azerbaijan. Now the conflict is buried in the archives of the history, which established a good opportunity to work on a peace agreement with Armenia and to think of the future, as repeatedly stated by President Ilham Aliyev. Now, there are new opportunities for regional development, regional cooperation, connectivity in the environment of good faith among all the neighboring nations in that region, and Azerbaijan is ready for that.”