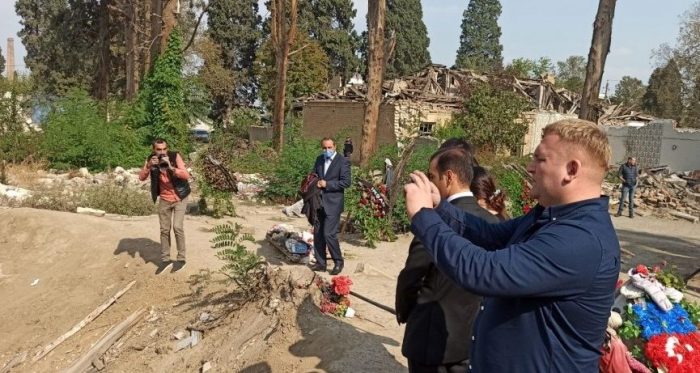 Members of the Interparliamentary Friendship Group with Azerbaijan of the Verkhovna Rada of Ukraine visited Azerbaijan's Ganja, AzVision.az reports.

Members of the Verkhovna Rada of Ukraine visited the territory where civilians were killed as a result of missile attacks on Ganja by Armenia.

Ukrainian parliamentarians were informed in detail about the terrorist act committed by the Armenian side in Ganja. It was noted that during the 44-day Second Karabakh war, the armed forces of Armenia, disregarding the norms and principles of international law, the provisions of the Geneva Conventions and additional protocols to them, grossly violating the requirements of the ceasefire declared for humanitarian purposes, which was reached following the meeting in Moscow at the insistent request of the Armenian side, deliberately fired at the peaceful population of Azerbaijan using ballistic missiles and heavy artillery.

The second largest city of Azerbaijan, Ganja, came under rocket and artillery fire on October 4, 5, 8, 11 and 17, 2020. As a result, 26 civilians were killed, including women and children, 175 people were injured. Enormous damage was caused to civilian infrastructure, historical and architectural monuments, as well as property of citizens, including housing and vehicles.