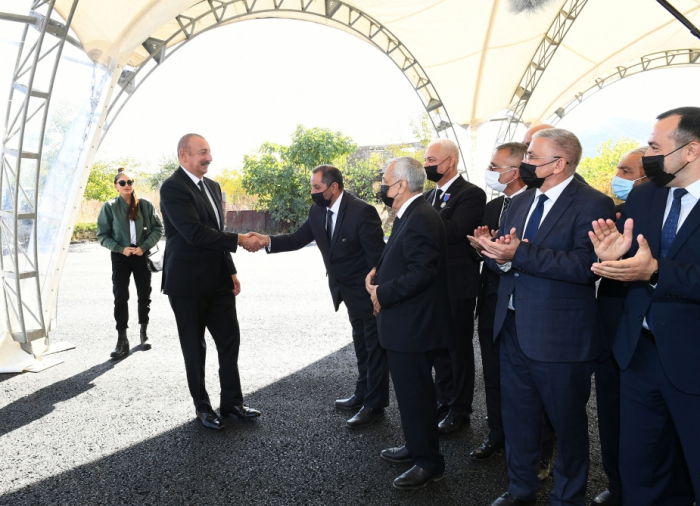 President of the Republic of Azerbaijan Ilham Aliyev and First Lady Mehriban Aliyeva have met with members of the general public of Gubadli district.

-Mrs. Mehriban Aliyeva: Hello, it is a pleasure to see you.

-President Ilham Aliyev: Hello, it is a pleasure to see you.

I have invited the natives of Gubadli district to Gubadli today. You are welcome to Gubadli. It is a significant and historic day in the history of Gubadli district today. Exactly one year ago, the victorious Azerbaijani Army liberated Gubadli from Armenian occupation, and from now on 25 October will be celebrated in our history as the Day of Eternal Victory. I sincerely congratulate you, the people of Gubadli, and all the people of Azerbaijan on this occasion.

25 October played an important role in the subsequent course of the war. Because after the liberation of Gubadli, our road in the direction of Lachin was clear, and a few days later we liberated the villages in the southern part of Lachin. Thus, we took control of the Lachin corridor and the outcome of the war was already decided. It is true that fierce battles for Shusha were still ahead, operational plans were being prepared on the liberation of our other settlements, but the whole world and the enemy could see by now that there was no force capable of standing in our way. After Gubadli, we continued our victory march, our victory mission with dignity, and raised the national flag in Shusha on 8 November.

The liberation of each settlement is a historic event. From the very first and until the last day of the war, the Azerbaijani Armed Forces were only advancing. The liberation of four villages on the first day brought great joy to the people of Azerbaijan. After many years, we all experienced the joy of this victory. At that time, of course, no-one could say for sure how long the war would last. Even after we liberated Shusha on 8 November, I personally could not say much longer the war would last. Our plans were to liberate all the occupied lands. But we did not know when the enemy would surrender. However, during the war, I repeatedly said in my speeches, addresses to the people and interviews with foreign journalists that if the enemy gave us a timetable for their withdrawal from our lands, we were ready to stop the war, and we kept that promise. As you know, on 9 November, the Armenian side also accepted its defeat, came to terms with this loss and signed an act of capitulation in the early hours of 10 November. We celebrate Victory Day on 8 November because it was on 8 November that the Armenian army surrendered.

When speaking of this glorious victory today, first of all, we must remember our dear martyrs. May Allah rest the souls of all our martyrs in peace. Our martyrs will live forever in our hearts. The people of Azerbaijan, the present and future generations will always be proud of our martyrs. One of them is our dear Shukur Hamidov. A resident of Gubadli district, he showed true heroism and died heroically in the battles for his native district. Shukur Hamidov was one of our most talented and courageous servicemen. He showed great heroism in the April battles. It was for this heroism that I named him a National Hero and personally presented this award to him. Then, during the first meeting with former IDPs, I met his father Nariman. I did not know that he was Shukur's father. He told me that at the opening of the IDP camp, and I greeted him. When I heard that Shukur had died – a few days ago, a year ago, it was the first anniversary of his death – we were all heartbroken. Shukur’s death is a great loss for us, for his family, for his relatives, for his father, for all of us. Therefore, today, on the first anniversary of the liberation of Gubadli, I would like to pay tribute to Shukur’s memory. He is an example for all our servicemen, for the younger generation. He sacrificed his life for his homeland and rose to the peak of martyrdom. The memory of our martyrs is and will be immortal.

After the completion of restoration work in all the liberated towns and villages, streets will be named after our martyrs. Their names will be given to schools. This process has already begun.

This will happen in all regions of the country, including the Karabakh-Zangazur region – after all the restoration work has been completed, streets and schools have been built. But there is a lot to be done. Many of you are visiting Gubadli for the first time after Victory, and you can see that the enemy has destroyed everything. The city of Gubadli is almost destroyed – there is not a single sound building left. The Armenian military simply used several buildings for their own purposes, and they were in a dilapidated condition too. When I came here in December last year, I saw that they were also in a bad condition. Therefore, we will rebuild all the villages of Gubadli district, including the city of Gubadli. The master plan of Gubadli is being prepared and will probably be submitted in the coming months, including to members of the Gubadli public. Of course, this master plan will meet the most modern requirements. The nature and historical past of Gubadli will be taken into account in planning the architecture. At the same time, specific work on the future development of Gubadli district is already underway. We have just celebrated the opening of a new substation, which is the seventh in the liberated lands. This infrastructure project takes into account the future development of Gubadli until 2050.

According to the information available to me, the total consumption of Gubadli district in Soviet times was 12 megawatts. However, this substation is designed for 40 megawatts, and if necessary, this capacity can be doubled. In other words, this is how we see the future development of Gubadli. In Soviet times, before the occupation, the population of Gubadli district was about 28,000, but now, according to my information, the population has reached 40,000.

All the villages have been destroyed, the city has been destroyed, not a single village has survived. Therefore, a lot will be done to accommodate the people of Gubadli. Infrastructure work is in the first place here. When you were coming here, you probably saw a very wide, four-lane road being built. There has never been a road of this size here. There was a narrow road from Zangilan to Gubadli and Lachin. We are now building a four-lane road from Zangilan to Gubadli and Lachin so that people can use this road comfortably. At the same time, there should be an opportunity to deliver products to the markets on time and without losses.

Zangilan airport will be commissioned next year. Zangilan and Gubadli are actually one and the same zone – the distance is not very large. Therefore, the people of Gubadli will also use it. Of course, the economic development plan of Gubadli district must be prepared separately. Because infrastructure projects have been approved. The master plan will cover all issues related to social infrastructure – schools, hospitals and other social facilities, residential buildings. Residential buildings will be built in Gubadli.

In Soviet times, there were more individual homes here. There were a few five-story houses. Fragments of one or two houses remain. Gubadli must develop as a city. Of course, with proper planning, all the conditions will be created for people to live comfortably here. As for economic development, of course, the district community must be very active in that – both in terms of the restoration work and in the development of the concept of future development of Gubadli. Because the district has immense potential, rich nature and natural resources. Two large rivers pass through the territory of Gubadli district – the Bazarchay passes right through the center of the city. The Hakari River is a great asset not only for Gubadli, but for all of Azerbaijan. We were deprived of these rivers. We were deprived of the Hakari, the Bazarchay, the Basitchay and the Tartar rivers. Armenians deprived us of them. This is a great asset. In fact, water resources are already recognized in the world as the main resource for the future, i.e. the primary resource for living. Therefore, proper planning must be carried out of what economic development should be like and what areas will develop. Of course, we will attract local and foreign investors. So we have major plans and there is a conceptual approach. After that, careful planning must be done, and I am sure that the residents of Gubadli will take an active part in that.

I have invited you today to celebrate this historic day together. This is truly a day that will live forever in the history of Azerbaijan. 25 October is Victory Day, the day of the liberation of Gubadli. After 27 years, we ended the occupation and drove the enemy out of our lands. The victorious Azerbaijani Army fulfilled its glorious mission with dignity. The second Karabakh war showed our strength and national spirit. It showed that we never intended to come to terms with that situation. Whereas the people of Gubadli, like other former IDPs, used to get together on the day of the occupation with great heartache every year, this date has been completely erased. However, we will all celebrate 25 October from now on. Congratulations again! 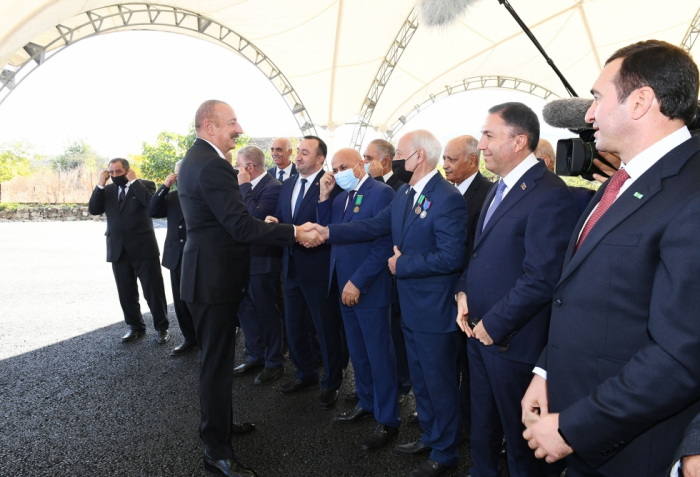 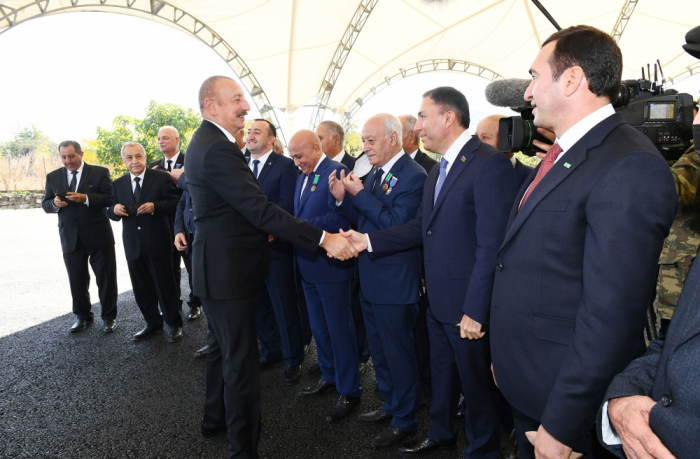 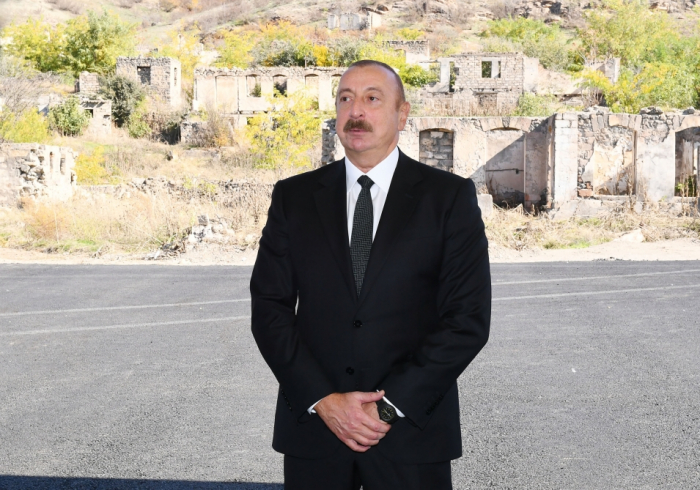 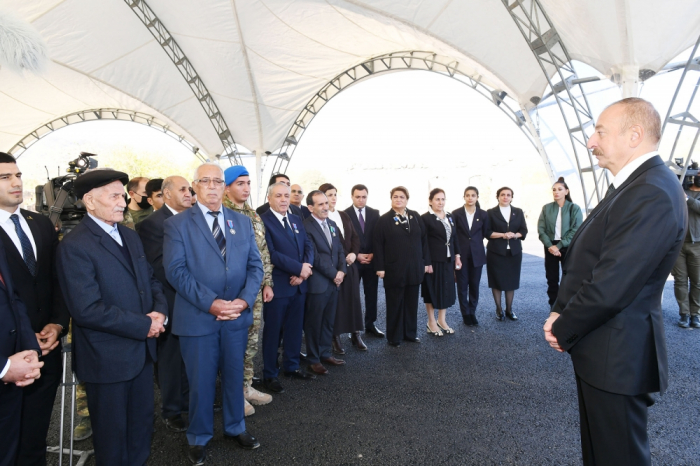 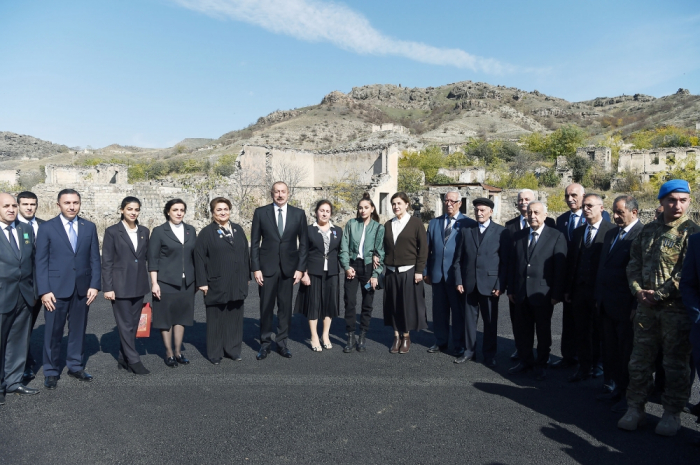 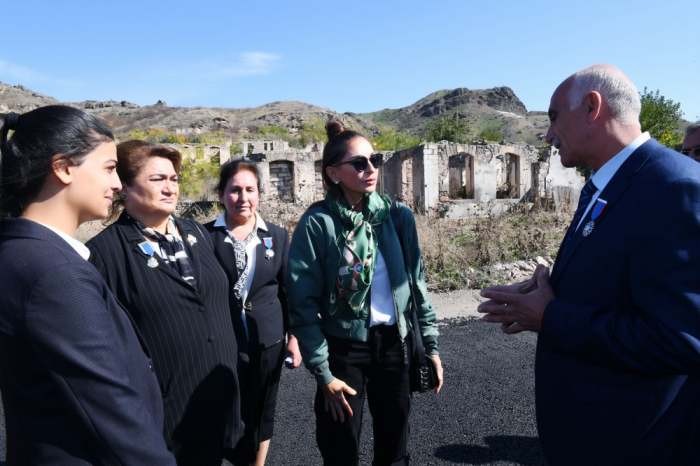