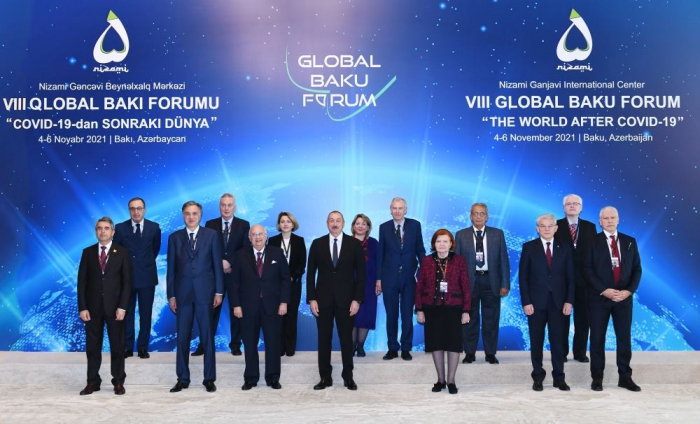 The next Baku Global Forum under the motto "The World after COVID-19" was launched under the auspices of President Ilham Aliyev and organized by the Nizami Ganjavi International Center.

According to the order of President Ilham Aliyev, on December 23, 2011, the Nizami Ganjavi International Center was established at a special meeting held on September 30, 2012 in Ganja, the poet's hometown, as part of the anniversary event in honor of the 870th anniversary of the great Azerbaijani poet Nizami Ganjavi.

As a non-governmental organization, it brings together former heads of state and government, as well as influential international experts from various foreign countries. The Center is the main organizer of the Global Baku Forum, held annually in Baku since 2013. Since 2013, 7 global Baku forums and 42 summits have been held.

The VIII Global Baku Forum has started its work today. Speaking at the opening ceremony of the forum, President Ilham Aliyev touched upon the positive model of Azerbaijan in the fight against the COVID-19 pandemic, the settlement of the Armenian-Azerbaijani conflict, Azerbaijan's implementation of UN resolutions and other important issues.

The wide interest in the forum at the level of countries of the world and international organizations is an indicator of the growing prestige of Azerbaijan, new realities and political power created by President Ilham Aliyev.

Political scientist Jeyhun Ahmadli told Trend that the speech of President Ilham Aliyev at the VII Global Baku Forum is of exceptional importance from the point of view of conveying new realities in the region after the war to the world community. In his speech, President Ilham Aliyev objectively presented the post-war realities.

"Speaking about the realities of the post-conflict period, the head of state once again expressed Azerbaijan's views on the future of the region. Stating that our country is ready for peace talks, President Ilham Aliyev informed the international community that an adequate response has not yet been received from Armenia on this matter. That is, we are ready to sign a peace agreement. Now the next step is up for Armenia.

This forum was also remembered for the appeals of world leaders. This is an indicator of the growing political authority and political power of Azerbaijan, the President of Azerbaijan. Today Azerbaijan is not only a leader in the region, but also a country that can say its word in the world and propose its own solutions," the political scientist said.

The editor-in-chief of the "Baku Khabar" newspaper, political scientist Aydin Guliyev told Trend that the work done under the leadership and instructions of President Ilham Aliyev over the past 18 years has significantly raised the country's international authority.

The VIII Global Baku Forum is a vivid example of this authority. Today Azerbaijan has become one of the leading countries in the world, has its own political weight and an important role in the international arena.

About 300 distinguished guests from more than 40 countries of the world are taking part in an international event organized in a hybrid format within the framework of the VIII Global Baku Forum under the motto "The World after COVID-19".

Among them are high-ranking officials, former heads of state and government, representatives of international and non-governmental organizations, politicians, political scientists and experts. Today Baku has become the center of political attention in the world.

The speeches of prominent statesmen, politicians and diplomats participating in the Forum once again prove that everyone is sufficiently aware of the seriousness of the Forum in Baku. World leaders attach great importance to the initiative of the President of Azerbaijan in solving global and regional problems and await the proposals and initiatives of Ilham Aliyev in search of ways out of any extreme situation.

The editor-in-chief said that the speech of the President of Azerbaijan at the forum once again showed how purposeful Azerbaijan is in achieving the goals of peace, health, justice and prosperity throughout the world.

"President Ilham Aliyev has sufficiently explained the importance of Azerbaijan's fight against the pandemic, not only as a national achievement, but also as an example of valuable experience.

The world has once again learned that Azerbaijan is an initiative country that has created the most effective mechanism for combating the pandemic. The world knows that the personal initiative, organizational qualities and responsibility of Ilham Aliyev have become decisive factors in the formation of national and global mechanisms for the successful fight against COVID.

For the first time, the world heard this truth that Azerbaijan bears maximum responsibility to the participants in the gas markets, which are its main suppliers, and is far from behaving in such a way as to cause artificial price fluctuations. The theses contained in the speech of the President will undoubtedly have an impact on further strengthening the image of Azerbaijan as a reliable partner.

One of the most important points is that President Ilham Aliyev once again denied the arguments of Armenian politicians who accused Azerbaijan of aggression and war. President Ilham Aliyev once again proved that Armenia is the cause and aggressor of the war. The President made it very clear that Armenia is the only party responsible for all the calamities of the war for non-compliance with UN resolutions, attempts to maintain the status quo and attempts to occupy new territories.

The VIII Global Baku Forum will end on November 6.