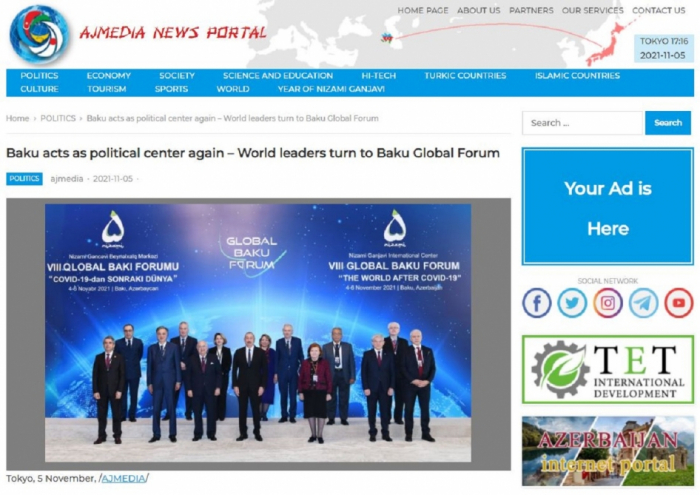 Japanese “ajmedia.jp” news portal has published an article highlighting the 8th Global Baku Forum the motto "The world after COVID-19” that kicked off on Thursday.

The article, titled “Baku acts as political center again – World leaders turn to Global Baku Forum”, provides detailed information about the history of the forum, its participants and emphasizes the importance of discussions held.

It notes that as a non-governmental organization, it brings together former heads of state and government, as well as influential international experts from various foreign countries. The Center is the main organizer of the Global Baku Forum, held annually in Baku since 2013. Since 2013, 7 global Baku forums and 42 summits have been held.

“Speaking at the opening ceremony of the forum, President Ilham Aliyev touched upon the positive model of Azerbaijan in the fight against the COVID-19 pandemic, the settlement of the Armenian-Azerbaijani conflict, Azerbaijan's implementation of UN resolutions and other important issues,” the article says.

The 8th Global Baku Forum attracts great attention and interest of world leaders, according to the article. “The wide interest in the forum at the level of countries of the world and international organizations is an indicator of the growing prestige of Azerbaijan, new realities and political power created by President Ilham Aliyev,” the article adds.