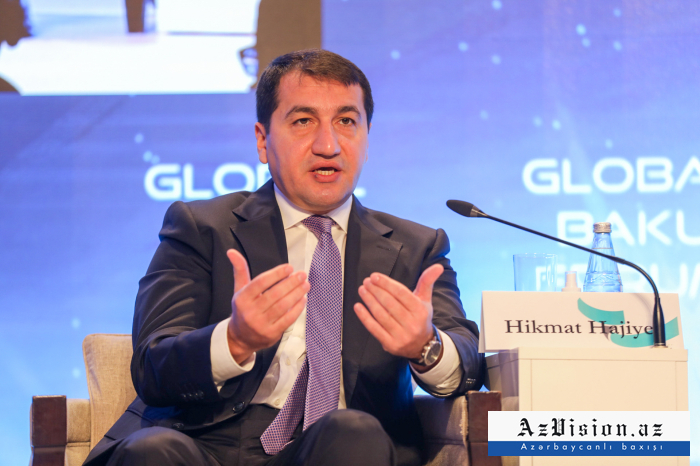 If Armenia cooperates with neighbors, it can become a transit country, Aide to the President of Azerbaijan - Head of the Foreign Policy Department of the Presidential Administration Hikmat Hajiyev said on the panel session on the topic "South Caucasus: Regional Development and Prospective for Cooperation" within the framework of the VIII Global Baku Forum titled "The World after COVID-19", AzVision.az reports.

Hajiyev stated that new thinking and strategy are needed for peace and development in the region.

"Armenia must change its strategy, because it has already suffered a strategic failure. Its strategy was aimed at occupying Azerbaijani lands, but the situation has changed, Armenia has become a victim of its strategy," Hajiyev said.

He noted that now Armenia must understand that it is necessary to establish friendly relations with all neighboring countries.

“Armenia will benefit, if it renounces territorial claims and establishes relations with Azerbaijan,” Hajiyev noted.

"We see that the Armenian people are tired of the aggressive policy. Armenia has no access to the sea. But if it establishes cooperation with its neighbors, it can become a transit country. The Armenian diaspora has a negative impact on Armenia. But it should have a positive impact," he said.

"We need information about the fate of these people. Azerbaijan is one of the countries that suffers from mines. During the occupation, Armenia mined Azerbaijani territories. At first, the Armenians denied this, but then they confessed and provided several maps of minefields, which were only useful for about 25 percent. Revanchism can become a tragedy for Armenia itself. Azerbaijan is interested in cooperation between all countries of the region," Hajiyev said.

The VIII Baku Forum brings together high-level representatives from more than 40 countries of the world, former heads of state and government, representatives of international and non-governmental organizations, as well as other guests to discuss issues of global importance.

The VIII Global Baku Forum will complete its work today.