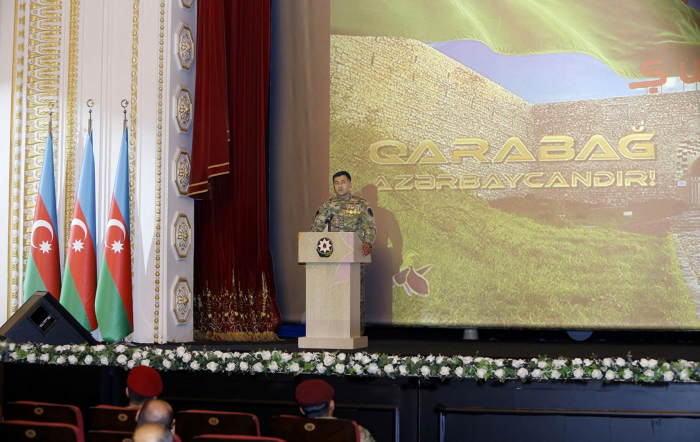 The events on the occasion of the Victory Day of Azerbaijan, to be celebrated on November 8, were held at the Heydar Aliyev Academy and the Cultural Center of the Azerbaijani State Security Service, the Service told AzVision.az.

The employees of the State Security Service, veterans of the second Armenia-Azerbaijan Karabakh War and cadets of the academy attended these events.

First, flowers were laid at the monument to Azerbaijani great leader Heydar Aliyev erected on the territory of the academy.

The participants of the event were informed about the history and activity of the Heydar Aliyev Academy at the Museum of Glory. The participants viewed the photo stands and other exhibits reflecting facts from the life of the national leader.

The participants of the event watched a documentary film dedicated to the glorious victory of Azerbaijan in the 44-day second Karabakh war.

Then cadets met with veterans of the second Karabakh War, gifts were presented to guests. The guests also attended an event organized at the Cultural Center of the State Security Service.

First, the memory of the heroic sons of the Motherland, who died for Azerbaijan’s sovereignty and territorial integrity, was revered by a minute of silence, the national anthem was performed.

Then a film about the second Karabakh War prepared by the Cultural Center of the State Security Service was shown.

During the event, hero of the second Karabakh War, Colonel Fuzuli Imraliyev spoke about the combat path during the 44-day war and the courage of his comrades together with whom he was fighting.

Imraliyev stressed the attention and care of the state for the servicemen and the families of martyrs.

The colonel also stressed that the representatives of the State Security Service are always ready to fulfill the orders and instructions of the Supreme Commander of the Azerbaijani Armed Forces.

Then a patriotic concert program was performed by famous figures of culture and art.