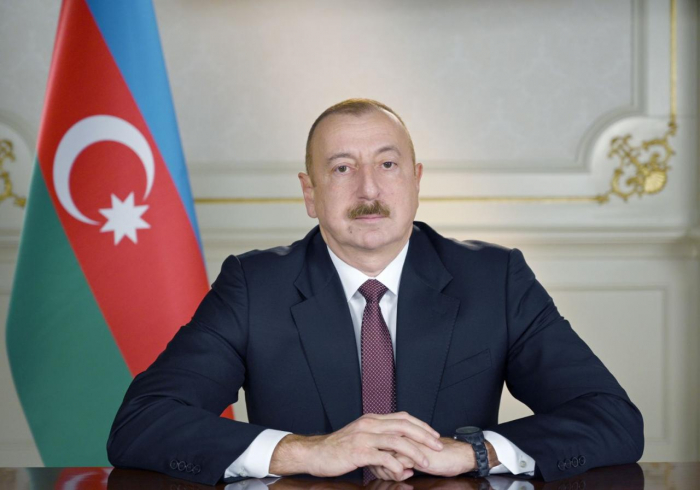 "On behalf of the International Secretariat of the ODED-GUAM and me personally, I would like to extend our sincere congratulations to You and in your person to the people of the Republic of Azerbaijan on the occasion of the first anniversary of the historic victory of the Armed Forces of the Republic under your leadership in the liberation of the illegally occupied lands of Azerbaijan!

The 44-day Patriotic war has demonstrated to the world the strength of the Armed Forces, unbreakable unity, unwavering will, and commitment of the nation and its leader. Today, as the country is celebrating the anniversary of the glorious victory, we are joining the people of Azerbaijan in commemoration of their heroes, especially those who gave their lives for the motherland.

This victory is the triumph of historical justice and a powerful message to the international community! After decades-long inertia of fruitless and useless efforts of international mediation in the resolution of the conflict around the occupied territories, by decisive and lightening action, in response to endless provocations, Azerbaijan has opted for the unilateral implementation of the UNSC Resolutions and restoration of the norms and principles of international law concerning its territorial integrity.

We also view this victory as a landmark event that triggered profound shifts and developments altering the geo-political and geo-economic landscape of the Black Sea and the Caspian Sea area, even more enhancing its strategic significance. Massive and rapid rehabilitation of the liberated lands, their incorporation into the national economy, as well as regional projects and initiatives under consideration, will undoubtedly contribute to inclusive cooperation of the countries of the region, closer integration of the region into a global economy, ensuring its sustainable development. The victory opened a new era that can bring long-awaited peace, stability, and prosperity to the war-torn region.

As a regional organization, uniting friendly nations and strategic partners, we are keen and ready to support regional projects and initiatives that will make this important geographic area an integral part of the wider international connectivity and security architecture.

On this remarkable occasion of the Victory Day, allow me to wish you every success in the realization of your plans and ideas aimed at the rehabilitation and development of the liberated lands, as well as peace, progress, and prosperity to the people of the Republic of Azerbaijan!"