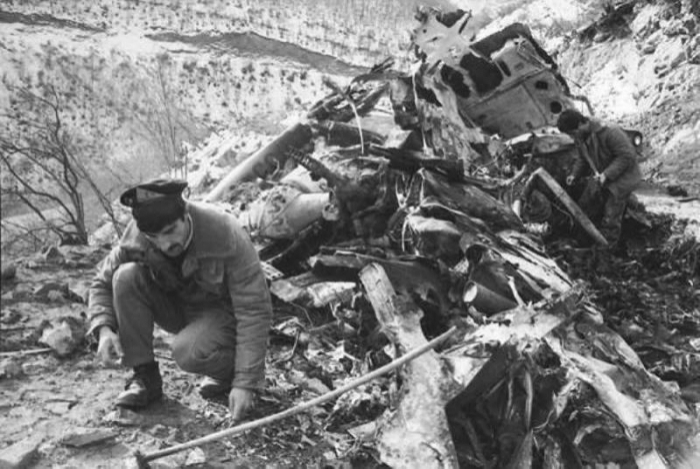 Azerbaijan has long been a victim of Armenian terrorism, which practically used all methods, including murders, arsons, hostage-taking, attacks and armed occupation, ecological terrorism, etc.

One of such heinous acts against Azerbaijan was committed in early 1990s with downing of the helicopter, Azerbaijan’s state officials on board.

November 20 marks the 30th anniversary of the downing of the Azerbaijani helicopter MI-8 by Armenian security forces near the Garakend village of Khojavand region on November 20.

Armenian armed forces knocked the civilian helicopter carrying the high-ranking Azerbaijani, Russian and Kazakh officials, journalists and parliamentarians over the Garakend village of Khojavand region, killing all on board.

The operational and investigative measures on the incident revealed the Armenian security forces to be behind the bloody event.

This fatal accident that was committed in the early years of the Nagorno-Karabakh conflict hampered the possibilities to regulate the problem.

Later, Armenia continued its terrorism activities against Azerbaijan committing more than 30 terror attacks on the ground and air transports, as well as subway. All these obviously proved that Armenia's main goal was to hinder the peaceful settlement of the conflict and occupy the Azerbaijani lands.

The bloody war, which flared up in the late 1980s due to Armenia's territorial claims against its South Caucasus neighbor, left displaced thousands of Azerbaijani civilians of Nagorno-Karabakh and the regions adjoining it, as well as the regions bordering with Armenia and Nagorno-Karabakh.

Azerbaijanis who were displaced from their homes as a result of the brutal war were forced to live in refugee camps, tents and wagons in very difficult conditions. They are temporarily settled in more than 1,600 settlements across 62 cities and regions of Azerbaijan.

The UN Security Council has passed four resolutions on Armenian withdrawal from the Azerbaijani territory, but they have not been enforced to this day.