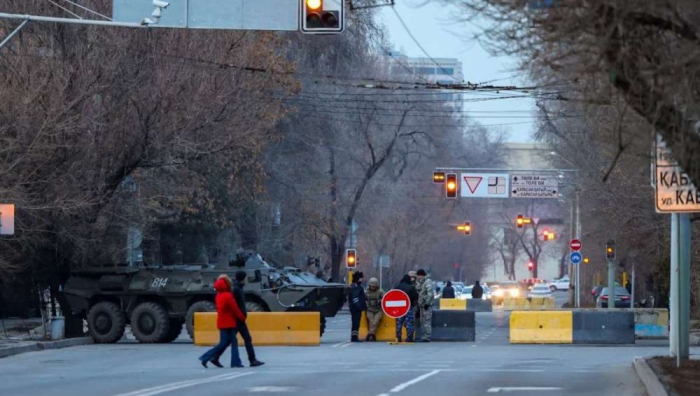 The state of emergency that was imposed in Kazakhstan amid riots in early January expired at midnight on Wednesday local time (21:00 Moscow time on Tuesday), AzVision.az reports citing Anadolu Agency.

Law and order, Kazakh authorities affirm, was restored to all of the country’s regions, but the anti-terrorist operation continues in several regions.

On January 5, amid growing protests and riots, Kazakh President Kassym-Jomart Tokayev imposed a state of emergency in the country until 00:00 on January 19. Apart from that, a curfew was imposed from 23:00 to 07:00 a.m. for the same period.

After the situation stabilized, the government has been slowly lifting the state of emergency since January 12.

On January 7, Kazakh National Security Committee declared a critical red level of terrorist threat alert. As the situation in 14 regions stabilized by January 13, the red alert was lifted. Later on that day, the orange alert was declared in Nur-Sultan and Shymkent for a period of 14 days, and the yellow alert level was imposed in several Kazakh regions for a term from ten to 14 days.

The red alert remains in place in Almaty where anti-terrorist operations continue.

Protests erupted in several Kazakh cities on January 2, escalating into mass riots with government buildings ransacked in several cities, primarily in Almaty, a few days later. The ensuing violence left thousands of people injured, with fatalities also being reported. Subsequently, Kazakh President Kassym-Jomart Tokayev turned to the Collective Security Treaty Organization requesting assistance from the Russia-led bloc. As a result, peacekeepers were deployed to Kazakhstan. Law and order, Kazakh authorities affirm, was restored to all of the country’s regions. The withdrawal of the peacekeeping contingent from Kazakhstan began on January 13. According to the Kazakh prosecutor general’s office, more than 4,500 people were hurt during the upheavals and 225 bodies were taken to morgues.