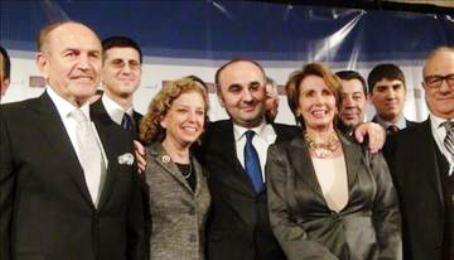 US Congressmen, Ambassadors, MPs and businessmen from Turkey and Turkic republics have attended the Turkic-American Convention in Washington.
There were about 800 participants.

The main agenda of the Congress was energy, trade and development, TRT reports.

Republican People`s Party MP Mehmet Ali Susam said the Convention gave a message to the world, and that message was the importance of Turkey in energy policies.

House of Representatives Minority leader Democratic Representative Nancy Pelosi was also one of the participants of the Convention.

8 Senators from the US Congress, and 39 Representatives attended the 3rd Turkic-American Convention.

Republican Senator John Bozzman they will continue their support for a longer Turkish-American partnership.

Republican Congressman Michael Turner pointed out that Turkey and the USA are two NATO ally countries and if there is enough support for activities similar to Turkic-American Convention, new opportunities could be presented the improve economic relations of both countries.

Seeking to improve commercial, social and political relations between Turkey, Turkic republics and the USA, the Convention held two sessions for Turkey.

Regional matters were laid out on the table and Turkey`s critical role was underlined.

Former US Ambassador to Turkey Ross Wilson said relations between Turkey and the USA were at the peak and that the two countries were acting in coordination in terms of foreign policy issues.