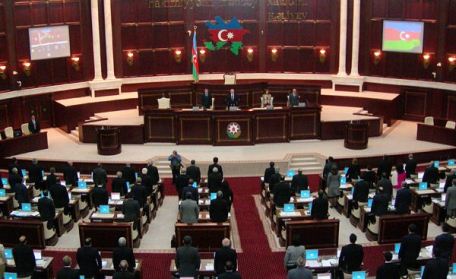 Milli Majlis (Parliament) of Azerbaijan will launch its autumn session on 30 September.
The agenda of the first plenary session of the parliament includes 41 issues.

It is also planned to ratify a number of intergovernmental documents between Azerbaijan and Russia including, in particular, bill on Program of Humanitarian Cooperation till 2015 as well as a bill on Agreement on Cooperation in Field of Aircraft Rescue and Search Operations.

The MPs also plan to ratify an agreement providing for construction of a bridge on the border river Samur.

The agenda of the first day of the plenary session also includes bills envisaging amendments to the laws on Social Benefits and on Fight against Legalization of Criminally Obtained Funds or Other Property and Financing of Terrorism, Approval of Provision on Commission for the fight against Corruption."

The parliamentarians will also discuss amendments to the laws on Lawyers and Lawyer`s Activity, on Notary and on State Duty as well as legal acts concerning migration agencies and municipalities and changes and additions to a number of codes.