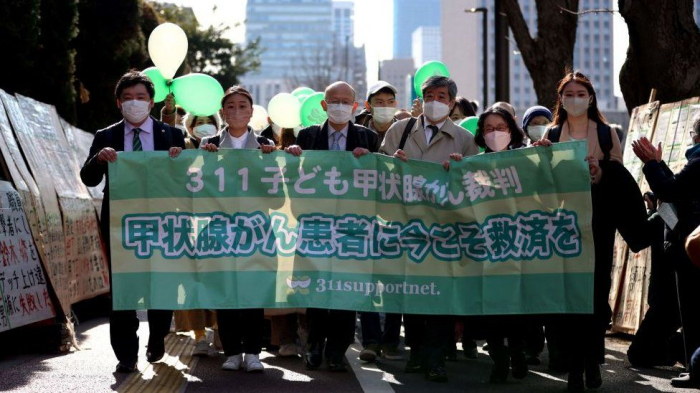 Six Japanese youth are suing the operator of the Fukushima nuclear plant after developing thyroid cancer in the years following the 2011 nuclear disaster.

The plaintiffs, aged between six and 16 at the time of the disaster, say they got cancer from radiation exposure.

All of them underwent surgery to remove parts or all of their thyroid glands, their lawyer said.

However, they may struggle to prove that the radiation led to their cancer.

A Tepco spokesman said the company was aware of the case filing and would address it once they had seen the details of the complaint.

The Fukushima nuclear disaster occurred on March 11, 2011 when a massive earthquake off north-east Japan triggered a tsunami which led to a nuclear meltdown.

It was the worst nuclear power incident since the 1986 Chernobyl disaster in Ukraine, but has been considered vastly less damaging to local people because far lower quantities of radioactive iodine were released.

However, long-term effects of the radiation remain a matter of debate.

A UN experts panel concluded last year that the disaster had not led to any direct health problems for the population. And a World Health Organization report from 2013 said the disaster would not cause any observable increase in cancer rates in the region.

But in 2018, the Japanese government announced that one worker had died after exposure to radiation and agreed that his family should be compensated.

However, the plaintiffs in this new case say it's probable the cancer was caused by exposure. None of the plaintiffs - now aged between seven and 27 - had any family history of thyroid cancer.

"Some plaintiffs have had difficulties advancing to higher education and finding jobs, and have even given up on their dreams for the future," lawyer Kenichi Ido told AFP news agency.

The case has attracted significant national interest. Despite the official readings, many people who were evacuated from Fukushima remain wary of the area. and have declined to return to their homes more than a decade after the disaster.