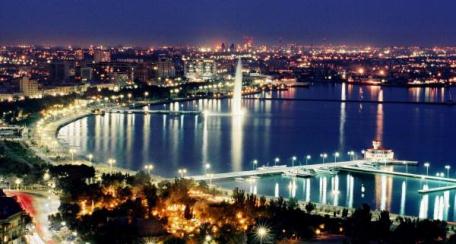 Dutch De Telegraaf newspaper has issued an article about Azerbaijan.

The article reads: “What do you think about it? Never before, we`ve been asked this question so often. It`s clear that Azerbaijan inspires the people`s imagination. And this is justified. In fact, in Azerbaijan, every experience was exceptional, every encounter special and every venue unique. So to reply to the above question, let`s just start at the beginning: Baku.

For thousands of years, Azerbaijan`s capital has been evolving, and this is still the case. Busy construction works are going on and the ultra modern Flame Towers – three skyscrapers that serve as offices, apartments and hotel are now in a final construction stage. We arrived in the city at night and saw 10,000 leg-lights on the buildings; it seems like a huge campfire. A new icon for Azerbaijan, which literally means, “Land of fire”.

“It all has to do with the natural gas, which at some spots escapes directly from the Earth and catches fire. Emil says as if it`s the most obvious thing in the world. He`s originally from Azerbaijan, but currently lives in London. `Many things have changed since I left, back twenty years ago. Just look all the new buildings!`. Indeed, the one modern construction after the other rises, each of them magnificently lit in the Azerbaijani night. Not to mention the imposing Soviet-buildings and the brand-new boulevard on the Caspian shore.

In daylight, a completely different world exposes itself to us. Emil is guiding us in the Old City with its City Wall that dates back to the twentieth century. We discover little medieval streets that once hosted many Silk Road caravans. It all looks very much like a Tale from The Thousand and One Nights, especially when we arrive to a Caravansary, where merchants once spent the night in the tiny vaulted rooms, their Camel at the Inner court. These days, they serve as restaurants, the bars and shops.
Time for a first stop, with a cup of tea and fresh fruit jam, taken right from the plate, without a piece of bread or a scone. It feels like eating secretly from the jam jar.

Baku is a busy city, but the ambiance is – besides the traffic – very relaxed. The shopping areas are all car-free and there are many public parks where people gather to have a relaxed chat. The boulevard is a nice place as well to walk. Emil smiles: `We drive as madmen, but walk as turtles, he adopted the rhythm of its compatriots. We feel a bit strange, walking too slowly and in such a relaxed way, a typical Western problem, according to Emil. `Azerbaijani people are very hard-working, but in the mean time, they can take distance and enjoy their rest.` It seems like everybody around us is on holiday, but they are really taking their lunch brakes. We install ourselves on another terrace, as relaxed as the locals.

The next morning we travel, after a morning tea, down to the Caucasus. `The mountains are a popular vacation spot, people come for fresh air and like to walk in the woods.`

In ancient times, it was already a popular area: from Russian to Persian and Roman to Greek, every was interested. Many wanted to control this rough area, but only succeeded partially, which has left charming places, as Gabala – the oldest city in Azerbaijan – never completely lost their identity. Despite the bucolic and “small village” appearance, the rural areas are subjest as well to impressive construction works.

The respective piano factory is one of the flagship projects of the government built up by the Dutch piano manufacturer Hans Leferink: `I once directed our family business Beltmann – my grandfather`s name – but it became very hard financially spoken. Here in Azerbaijan, I now get the chance to produce the real Beltmann pianos and to educate people. Currently, we produce about 1,000 pianos a year, with 140 skilled employees who all are from Gabala. Everything is handicraft! `Without interruption, he shows us with pleasure every step in piano construction. `I live for my work! But my evenings are very relaxed though. Not the pressure I`ve experience before in the Netherlands, just a healthy walk in nature.` He concludes his tour with a compilation of classical pieces on the piano. `Self made,` he grins.

We leave Gabala behind us and travel deeper into the Caucasus, right to the town of Sheki, host to the only remaining palace of the Khans of the 18th century. The beauty palace is built without a single nail, it fits together like almost like a 3-D puzzle. Although the Russians conquered Sheki at the beginning of the 19th century and many of the existing buildings were destroyed. `The residents of Sheki have in one way or another convinced their conquerors of the utility and beauty of the palace` Emil tells to us while we admire the colorful façade and stained glasswindows.

Both on the inside and on the outside, the palace is a real work of art, all pieces of wood, glass and stone meticulously fit together and the building was completed in 1762. In the main room on the ground floor, we find a kind of fountain. Emil explains to us: `Freezing melt water, directly from the mountains came out of it, one of the first forms of `air conditioning`, `and the high threshold where you just stumbled on served to keep out the draft, as outside the summers are hot here, the winters are cold.”