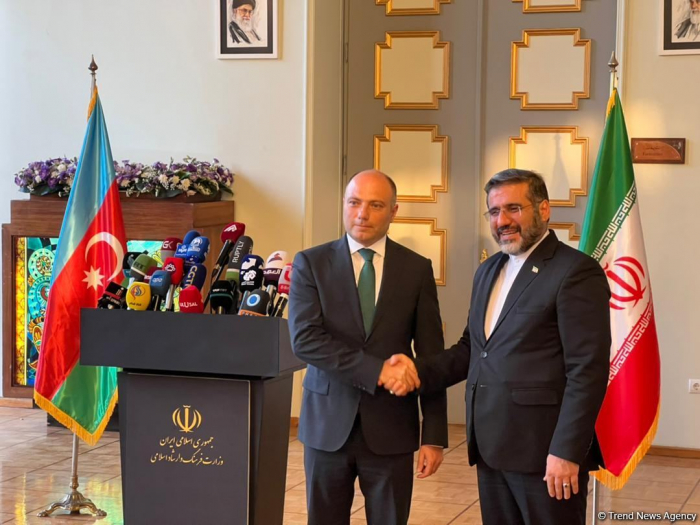 With the signing of a joint cooperation program in the near future, cultural ties between Iran and Azerbaijan will be further developed, Minister of Culture and Islamic Heritage of Iran Mohammed Mehdi Esmaili said at a joint press conference with Azerbaijani Minister of Culture Anar Kerimov in Tehran, AzVision.az reports.

"At a meeting with my Azerbaijani colleague, we discussed the issues of mutual visits, organization of joint film festivals, filming films about famous personalities and other issues that can contribute to the development of historical ties between the two countries," Anar Kerimov said.

Kerimov also stated that along with political and economic ties, cultural ties will develop even more between Azerbaijan and Iran,

"Today, my Iranian colleague and I held discussions in many areas, in particular in the areas of literature, holding book exhibitions, cinema and theater, holding Days of Culture, preserving cultural heritage. Taking advantage of friendly relations, we will develop cultural cooperation. The return of culture to Karabakh, to this primordial Azerbaijani land liberated from occupation, was discussed. Cooperation with Iran in this area was also discussed, in particular, joint projects between Iran and Azerbaijan within the framework of declaring the city of Shusha a cultural capital. I am confident that this visit and today's useful discussions will strengthen our cooperation in the field of culture," he added.

Inviting his Iranian colleague to Azerbaijan, Karimov noted that within the framework of the visit of the Minister of Culture of Iran to Azerbaijan, an exchange program in the field of culture will be signed between the two countries.