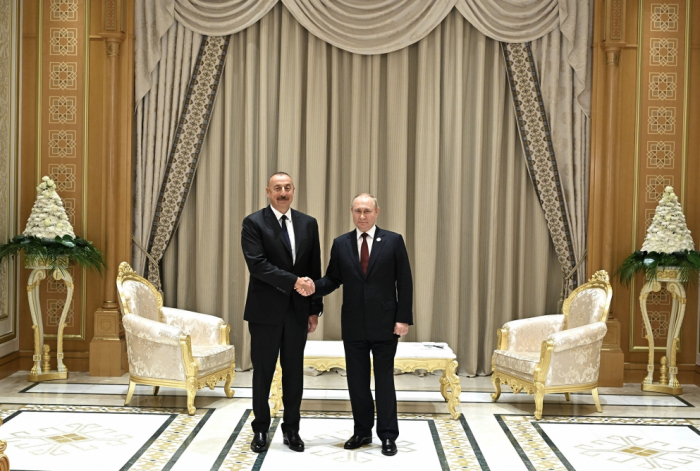 Noting that he was very pleased to have the opportunity to meet with President Ilham Aliyev on the sidelines of the Caspian Summit, President Vladimir Putin recalled the visit of the head of state to Russia, adding that this year marked the 30th anniversary of the establishment of diplomatic relations between the two countries. Emphasizing that the relations between the two countries were gaining momentum and were at a very good level, the President of the Russia said that all the discussed issues were being implemented. President Vladimir Putin noted that trade was growing. Last year, growth exceeded 16 percent, and in the first three months of this year, it rose by a further 5.5 percent. Thus, there is a steady increase in trade turnover.

Touching upon political contacts, President Vladimir Putin recalled the visit of the Russian Foreign Minister to Baku, said that visits of the Prime Minister and the Chairman of the State Duma of the Russian Federation to Azerbaijan were being prepared. The Russian President stressed that the implementation of the plan of the Russian-Azerbaijani cooperation for the period up to 2024 was of priority importance. So development is observed in all areas.

President Vladimir Putin also noted that discussions had been held with the President of Azerbaijan on issues of regional security, including the settlement of the Karabakh problem, and this meeting was a good opportunity to review that topic.

Recalling the remarks by President Ilham Aliyev during informal contacts at lunch, the Russian President said that the summit was businesslike and that many interesting proposals on the development of regional cooperation had been put forward. Stressing that the meeting with the President of Azerbaijan was useful, President Vladimir Putin noted that the discussions held would give an additional impetus to bilateral relations.

Expressing his gratitude for the kind words, President Ilham Aliyev said that he was very pleased to meet with the President of Russia. The President of Azerbaijan stressed that meetings with President Vladimir Putin had always been very important for bilateral ties. The head of state expressed his confidence that the meeting would also contribute to the development of friendly and good neighborly relations between the two countries.

The President of Azerbaijan also expressed his satisfaction with the growth of trade between the two countries, as well as the expansion of industrial cooperation, cooperation in the transport and energy sectors. The Azerbaijani President said that this meeting opened up good opportunities for discussing regional issues.

President Ilham Aliyev noted the importance of the recent visit of the Russian Foreign Minister to Azerbaijan in terms of developing ties and expressed his confidence that bilateral relations would continue to develop successfully for the benefit of the two countries and peoples.

The sides also discussed prospects for bilateral relations and issues of mutual interest.