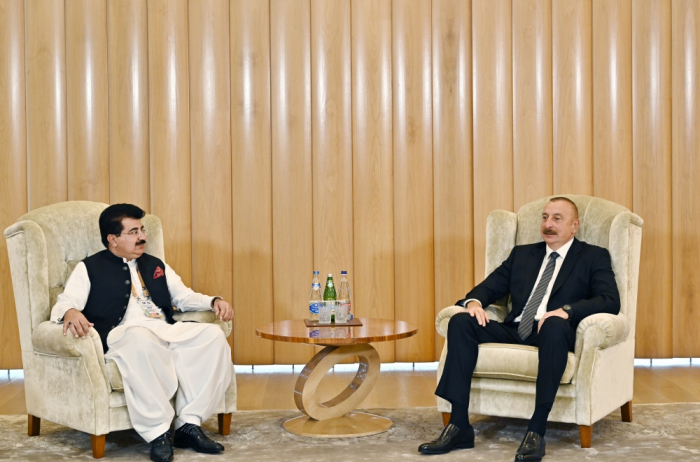 President of the Republic of Azerbaijan Ilham Aliyev has received Chairman of the Senate of the Islamic Republic of Pakistan Muhammad Sadiq Sanjrani.

President Ilham Aliyev thanked for the greetings of Arif Alvi and asked Muhammad Sadiq Sanjrani to convey his greetings to the Pakistani President.

Touching upon the visit of Muhammad Sadiq Sanjrani to Azerbaijan, President Ilham Aliyev said that the visit had created a good opportunity for exchanging ideas on issues related to bilateral relations.

The head of state praised Pakistan's brotherly support for Azerbaijan at all times, especially during the occupation of lands, the second Karabakh war and in the post-war period. President Ilham Aliyev noted that at that time, the people of Azerbaijan were very impressed by the fact that Pakistan had not established any diplomatic relations with Armenia due to Armenian occupation.

Stating that his country always supported the just and fair position of Azerbaijan in the former Armenia-Azerbaijan conflict, Muhammad Sadiq Sanjrani emphasized that the people of Pakistan celebrated Azerbaijan's Victory with great joy.

The Chairman of the Senate of the Islamic Republic of Pakistan congratulated President Ilham Aliyev on the glorious victory won in the Patriotic War and the liberation of lands from occupation.

He emphasized the importance of the Baku Conference of the Non-Aligned Movement Parliamentary Network.