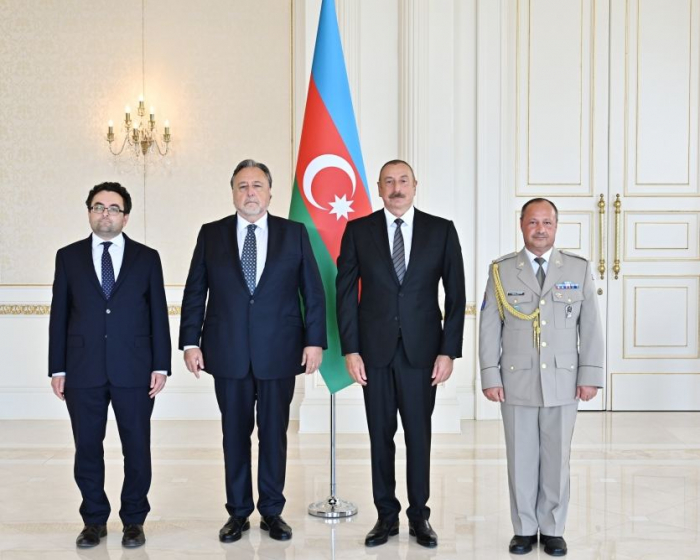 President of the Republic of Azerbaijan Ilham Aliyev received the credentials of the newly appointed Ambassador of the Czech Republic to the country Milan Sedláček, AzVision.az reports.

The ambassador extended Czech President Milos Zeman’s greetings to the head of state and noted that the Czech President gave him instructions regarding the expansion of cooperation, particularly the economic relations with Azerbaijan.

President Ilham Aliyev thanked for the greetings of the Czech President and asked the ambassador to extend his greetings to President Milos Zeman.

Pointing out the contribution of high-level visits, including regular contacts of delegations between the two countries to the development of bilateral relations, the head of state hailed the good potential for expanding economic cooperation and increasing the volume of mutual trade.

The President of Azerbaijan praised good opportunities for cooperation in the fields of industry, agriculture, modern technologies as well, and emphasized the importance of issues related to transport infrastructure. The head of state noted that taking into account the increase in the volume of cargo transportation from East to West passing through Azerbaijan, there are opportunities for cooperation in this field as well.

Expressing his country’s keenness to cooperate with Azerbaijan in energy sector, the ambassador pointed to other projects, including the great interest of the Czech Republic in the Alat Free Economic Zone and in the restoration and reconstruction work carried out in the liberated territories.

The sides exchanged views on prospects for cooperation in humanitarian, scientific, educational, and tourism fields.