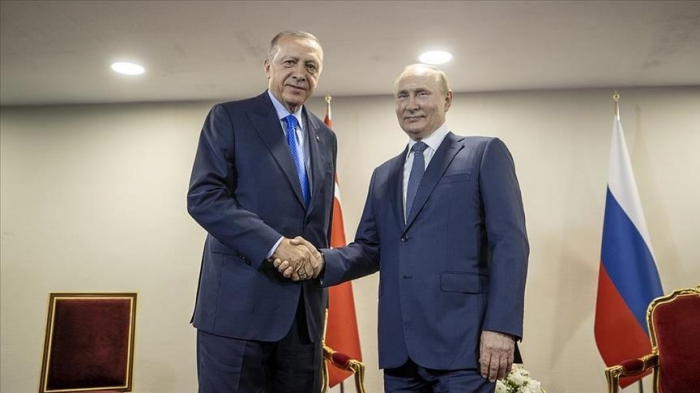 Russia's approach towards Türkiye's mediation on getting Ukrainian grain out of Black Sea ports was "positive," the Turkish president said on Tuesday.

"The approach of the Russian delegation in the last Istanbul meetings was very positive. The outcome of the talks will have a positive impact on the whole world," Recep Tayyip Erdogan told his Russian counterpart Vladimir Putin in Iran's capital Tehran.

Erdogan's remarks came in a brief statement with Putin for the media before their one-on-one meeting ahead of the 7th trilateral summit meeting in Astana format which is due hosted by Iranian President Ebrahim Raisi to discuss the latest developments in Syria, and the fight against terror groups, particularly the PKK and its Syrian offshoot the YPG/PKK, and Daesh.

The Turkish president said he believes that the talks will be "fruitful."

For his part, Putin thanked Erdogan for Türkiye's mediation efforts on food and grain issues, adding that the process for the Ukrainian grain exports has moved forward with Ankara's mediation.

The issues about the exports of Ukrainian grain from Black Sea ports have not all yet been resolved, but having progress is already a "good sign," Putin said.

There are many issues on the Syrian settlement matter and "promising large bilateral projects" are developing and moving forward, he added.

Turkish National Defense Minister Hulusi Akar said that during the week the issues of setting up an operations center in Istanbul, joint controls at the port exit and arrival points, and ensuring navigational safety on the transfer routes are likely to be discussed.