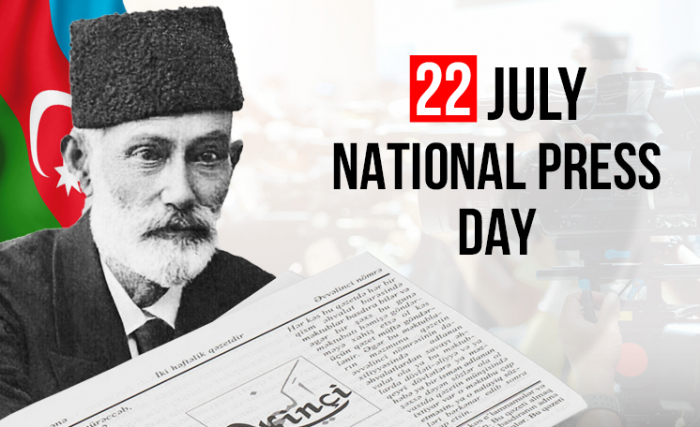 Azerbaijan celebrates the 147th anniversary of the establishment of the national press, AzVision.az.az reports.

22 July, the first day of publishing the "Akinchi" newspaper, founded by Hasan Bey Zardabi, has been marked as National Press Day in Azerbaijan since 1991.

Although only 56 publications of "Akinchi" were published from July 22, 1875, to September 1877, it played an invaluable role in the establishment and development of the national press of Azerbaijan. "Akinçi", which mainly undertook the mission of enlightenment, became very popular among both the intelligentsia and ordinary people in a short time. It is no coincidence that prominent intellectuals and writers of the time cooperated with the newspaper and published regular articles. However, the life of "Akinchi" did not last long. Tsarist Russia began to avoid the newspaper's role in educating people, making them more familiar with social and political processes, and eventually stopped publishing the newspaper.

Since then, the Azerbaijani press, which has gone through various periods of decline and renaissance, has always played the role of a mirror reflecting society's view of the processes. The abolition of censorship in August 1998 gave a serious impetus to the development of the press in Azerbaijan.

According to the Decree of the President of Azerbaijan Heydar Aliyev dated August 16, 1998 "On measures to ensure freedom of speech, thought and information in the Republic of Azerbaijan", censorship of the mass media was abolished in the country. This decree, in addition to giving serious impetus to the rapid development of mass media, defined the main directions of the broad State Program in the field of increasing their rationality.

Currently, a large number of different newspapers and magazines are published in the republic, and internet journalism is developing.

The decrees on the widespread celebration of the anniversaries of the national press in the country, the provision of one-time assistance to the mass media, measures to strengthen the social protection of press workers, as well as awarding journalists with honorary titles for their services in the development of the national press are also part of the care for the press and press workers.

Based on the decrees of the head of state on strengthening the social protection of Azerbaijani press workers, two residential buildings were built for journalists. In 2013 and 2017, President Ilham Aliyev participated in the ceremony of distribution of apartments on the occasion of the National Press Day in the building built for journalists.

The fact that freedom of speech and press is reflected in the Constitution of Azerbaijan as a basic principle has given impetus to the formation of the media as a free and strong social institution in the country. It goes without saying that the main participants of all these processes, the main causes of the obtained results are Azerbaijani journalists.

On June 30, 2020, President Ilham Aliyev signed a decree on holding the 145th anniversary of the Azerbaijani national press.