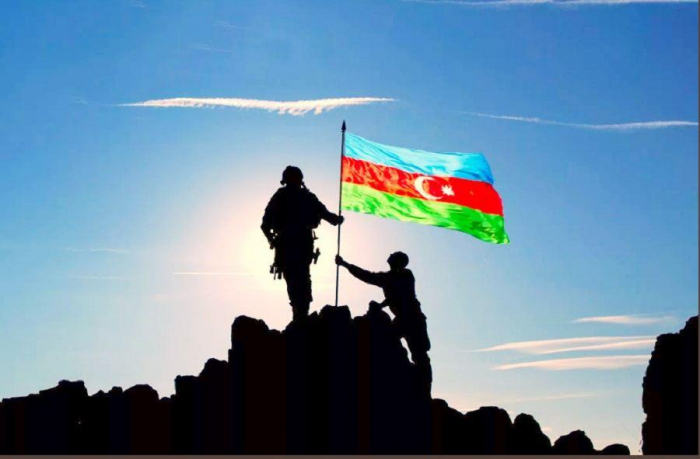 By Ashfaq Ahmed and Afzaal Chaudhary

However, Azerbaijan’s Western neighbor Armenia’s military was encroaching to take control of Azerbaijan’s Karabakh region. Fighting breakout between South Caucasian states eventually Yerevan illegally occupied twenty percent of Azerbaijan’s sovereign territory. The War broke out in 1988 and caused irreparable damage to Azerbaijan. On February 25 and 26, 1992 Armenian occupation forces carried out massacre in Khojaly. Other notable events include cultural genocide by deliberately destroying “Bread Museum,” damaging Juma Masjid, house of Khurshidbanu Natavan in Shusha. These incidents are tip of the iceberg. Armenian forces occupied seventy three percent of Aghdam in 1993, killed and force expelled thousands of others from their homes. After the Independence, Heydar Aliyev, father of Modern-Day Azerbaijani Nation led the country to utilize nation’s resources and rebuild the country, unite the nation under one flag and one cause. Heydar Aliyev set the direction of independent foreign policy of the newly independent state.

Azerbaijan in the light of UN Charter to raise arms in self-defence repelled enemy forces and liberated occupied territories. Commander-in-Chief President of Azerbaijan and Vice President, dressed up in military uniforms to boost the morale of the nation. Entire nation was on one-page. High morale plays a great role in winning a war because every soldier goes with the energy and believe that they will outcast their foes. Azerbaijan's determination and courage was much higher than before and it was also strong militarily. This war lasted for about six weeks, not only the regular army of Azerbaijan participated in this war, but every child, old and young people, even the women of the Azerbaijan became a soldier.

Armenian forces continued their war crimes in the midst of war including use of banned cluster bombs, phosphorous, destroyed wine-yards, scorched forests, fired indiscriminate rockets, targeted urban centers with ballistic missiles to kill unarmed civilian population. Acts of vandalism were unearthed at the end of Forty-four Days War. Armenian forces planted thousands of banned landmines prior to withdrawing occupied territories. Landmines have caused deaths of civilians and journalists. Russian negotiated agreement was signed after Azerbaijani forces took control of strategically significant, the Jewel of Karabakh Shusha. During this war international institutions remained silent as usual, Instead Amnesty International accused Azerbaijan of using cluster bombs in violation of international law. France, a member of MINSK Group created by Organization on Security and Cooperation in Europe (OSCE) had to remain neutral. However, it provided military aid and sided with the aggressor. Despite all these tactics, Azerbaijan defeated Armenia and freed all important territories, including Karabakh and Shusha from Armenian occupation. Karabakh is an internationally recognized territory of Azerbaijan and there are about four UN resolutions on it. Ilham Aliyev fulfilled his father's dream of taking back Karabakh and Shusha. Younger generation that heard stories of Karabakh from their elders were eager to visit the area. The victory of Azerbaijan was a lesson for Azerbaijan that it cannot ignore its national security and aggression from its bellicose neighbour. It will have to prepare its forces to get ready for undeclared wars. Further, self-help is necessary to preserve its national security.