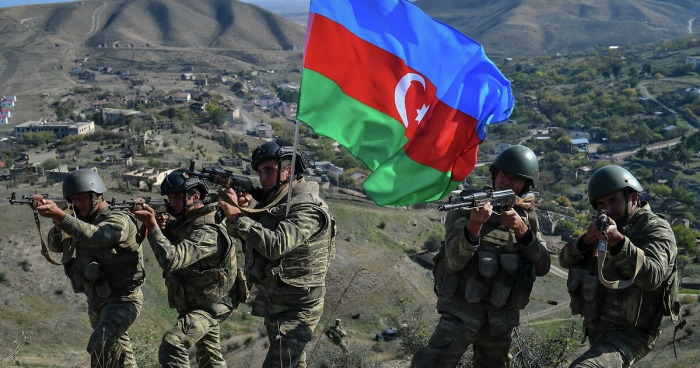 It seems that the armed forces of Armenian are on the “run” from all fronts. They started another failed attempt to spoil the peace and stability in the region through its “enigmatic activities” and “draconian provocations” at different borders of Azerbaijan i.e. Dashkasan, Kalbajar and Lachin due to which common people and servicemen remained under heavy mortar and gunship firings from the Armenian side.

Therefore, Armenia again seriously “breached” the trilateral peace agreement and committed a serious crime against humanity, sovereignty and territorial integrity of another independent country, Azerbaijan and its common civilian people.

In this regard, initially, the Armed forces of Azerbaijan showed total “restrain” but unstoppable heavy shelling of Armenia forced them to take all possible countermeasures to deter unprovoked acts at its borders. Thanks to Azerbaijan’s armed forces did not indulge in any so-called military misadventure as propagated by the Armenian social media handlers and remained within its borders.

Furthermore, as usual, the Armenian Diasporas living in different parts of the world disseminated false, fake and fictional propaganda against the so-called military encroachment of Azerbaijan side which is absolutely “untrue”, “fake” and “brainchild” of a defeated army of Armenia.

Actually, they are behaving like a “fleeing army of mosquitos” which does not any vision but a “revolving vicious past”, full of genocides, massacres and racial discrimination against innocent and peaceful Azerbaijan people living for centuries in these areas.

The most recent attacks on the Azerbaijan embassy in “Beirut”, Lebanon and “self-glorification” in California vividly reflected their “sick-mindedness” and “conspiratorial characters” always force them to violate spirits of decency, diplomacy and development and habitually indulged in severe crimes against simple and pure humanity.

In this context, many reports and media centres publications (September 17, 2022) reconfirmed the massive destruction of military equipment and personnel of the Armenian side during the clash on the Azerbaijan-Armenia border on September 12-14.

Moreover, the dislocation point of one brigade of the enemy side, and firing points of 2 S-300 and 2 S-125 divisions were destroyed. It was noted that 74 fighting positions, 2 mortar firing positions and 11 strategic heights were taken under control. The recent number of losses of Armenia is at least 450.

On September 16, the Combined Arms Army in the Nakhchivan Autonomous Republic shot down an unmanned aerial vehicle (UAV) of the armed forces of Armenia, which attempted to carry out reconnaissance flights over the defence positions.

According to the Ministry of Defense of the Republic of Azerbaijan, sabotage groups of the armed forces of Armenia using the mountainous relief of the area and existing valley gaps carried out planting landmines in the areas between the positions of the units of Azerbaijan’s army and the supply roads in different directions.

Moreover, Armenian armed forces fired intensively at the positions of the Azerbaijani Army in the Dashkasan, Kalbajar and Lachin regions with different types of weapons, including mortars. As a result, there were casualties among the Azerbaijani armed forces and damage inflicted on military infrastructure.

Unfortunately, the “wandering souls” of Armenian armed forces have been designing numerous provocations against Azerbaijan in the directions of Lachin, Gadabay, Dashkasan and Kalbajar regions of the state border and behaving like “wolves knocking at the doorsteps”. The Armenian armed forces used various types of weapons and firing remained intensive and systematic.

Moreover, Armenia’s increased its “militarization” along Azerbaijan’s borders and deployed heavy equipment and large-calibre weapons in the region indicating that Armenia was preparing for a large-scale military provocation.

In this regard, responsibility for the provocation, clashes and losses lies with the military-political leadership of Armenia. The ministries of Foreign Affairs and Defence of Azerbaijan uphold that any such actions against the territorial integrity and sovereignty of the Republic of Azerbaijan will be resolutely prevented."

To conclude I would like to clarify that my last article titled “Azerbaijan: Time to change the military strategy” of the last week published in different media outlets is somehow “misquoted”, “misconceived”, “misinterpreted” and “misperceived”. The armed forces of Azerbaijan are “undoubtedly” second to none in the South Caucasus. It has a “great” army which has a “rich history” of bravery, courageousness and “martyrdom’ and knows the art of war in its all professional and tactical formations. Its air force has many “distinctive” comparative advantages over poor Armenia.

Furthermore, its border forces units are the best in the world because they are fighting against clandestine operations of Armenian forces in which purposeful networking of wild spread deadly mines, difficult mountain terrains, hidden tunnels and geography of darkness and deceiving hang-over is creating trouble.

So it was not a gross intelligence failure on part of Azerbaijan's armed forces and its secret agencies. Because they are vigilantly standing fast at borders and ever ready to sacrifice their lives for national pride, honour and sovereignty against any external aggression.

It seems that Armenia has specific madness in its current military misadventures against Azerbaijan's armed forces and its civilians which should be neutralized with a “flurry” of unmanned drones which will provide cheap access to tactical aviation and precision-guided weapons, enabling them to destroy Armenian much-costlier equipment such as tanks and air defence systems. In this regard, the formation of “new drone war units” of predators Turkish Bayraktar TB2 and Israeli kamikaze drones would be value addition.

Furthermore, use of modern electronic war gadgetries, night vision weapons in terms of night vision monoculars, binoculars, Goggles (NVG) and night vision rifle scopes along with tactical sensors and anti-radar electronic devices should be used at the borders to closely monitor all suspicious activities of Armenian forces in the darkness.

Strategically, Azerbaijan, Türkiye and Pakistan should form a trilateral military alliance to protect their vested interest in the region and beyond.

Dr Mehmood Ul Hassan Khan is an  Executive Director at the Center for South Asia & International Studies (CSAIS) Islamabad and a Regional Expert on topics related to Azerbaijan & South Caucasus.