Turkish FM to visit US to discuss bilateral relations 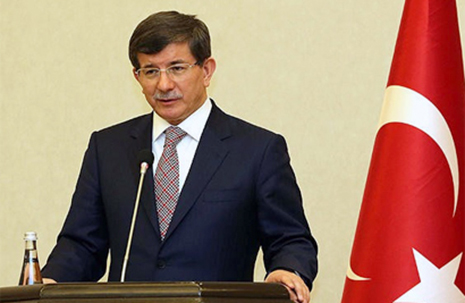 Turkish Foreign Minister Ahmet Davutoglu, by invitation of US Secretary of State John Kerry, is expected to pay an official visit to Washington on Nov. 18 for talks on bilateral relations and regional developments.

"During the visit, there will be meetings with officials from the White House, State department and US Senate. Bilateral ties and regional developments, including Syria, Iran, Iraq and Afghanistan, will be the main agenda for the two ministers. Davutoglu`s visit is expected to last one and a half or two days," a Turkish official, who wished to remain anonymous, told Today`s Zaman.

According to a report from the Aksam daily, Davutoglu`s main topic for discussion with his American counterpart will be the Syrian civil war which has raged on Turkey`s doorstep for more than two and a half years. The report says that the officials are expected to discuss the Geneva II conference and the future of Syria in an effort to prepare the ground for a smooth transition in the war-torn country.

The Aksam article noted that another issue Davutoğlu is expected to discuss is Turkey`s role as a mediator in Iran`s nuclear talks. At the time of the recent UN General Assembly, Iranian President Hassan Rohani signaled that his country is ready to engage in nuclear talks with Western countries. Turkey and Brazil, both non-permanent members of the UN Security Council, tried to revive the stalled deal with Iran in an attempt to help the Islamic republic avoid new UN sanctions imposed due to its ongoing nuclear program in 2010.

The official denied that Turkey has any desire to play a mediator role in the dismantlement of Iran`s nuclear program and said that Turkey will assist the talks only if one of the sides requests its help. "There seem to be no problems with the nuclear talks between Iran and Western countries. However, if they [Iran or other Western countries] wish Turkey to take part in the talks, Ankara is ready to support the talks in order to settle the problem. But it is certain that Turkey won`t step forward by itself to be a mediator in the talks," the official said.

The report also says that Turkey`s much-debated choice to acquire a Chinese long-range air-defense system will also be among the main items discussed by Davutoglu and Kerry. The report notes that in his visit to Washington, Davutoglu will tell his counterpart that Turkey will assess a new bid from the competing American firm according to its suitability for Turkey`s needs, which are technology transfer, co-production, quick delivery and a reasonable price.

However, the official dismissed the report`s claims that Turkey`s choice of a Chinese missile will be one of the main topics, explaining: "The issue of the Chinese missile might be discussed in these bilateral meetings, but it is certain that it won`t be the most important topic. This is an issue that should be discussed between defense ministers. Davutoglu isn`t even part of the commission that is responsible for the missile deal."

Turkey announced on Sept. 26 that it had chosen the FD-2000 missile-defense system from China Precision Machinery Import-Export Corporation (CPMIEC) over rival systems from Russian, US and European firms. However, the Chinese firm is under US sanctions for violations of the Iran, North Korea and Syria Nonproliferation Act Sanctions (INKSNA).

Washington recently expressed its concerns to Turkey, an ally and NATO member, about its decision to opt for the Chinese system.