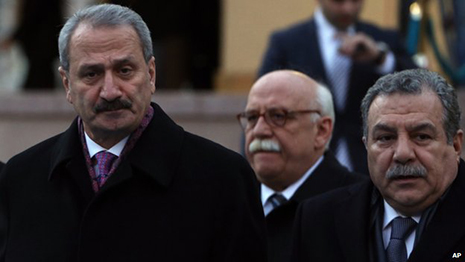 Turkish Economy Minister Zafer Caglayan and Interior Minister Muammer Guler have resigned after their sons were charged amid a corruption inquiry that has hit the government.

Twenty-four people have been charged as part of the investigation, including the head of state-owned Halkbank.

In a statement, Mr Caglayan condemned the inquiry as an "ignoble operation".

PM Recep Tayyip Erdogan has threatened to "break the hands" of rivals who used the inquiry to undermine his rule.

Mr Caglayan`s son Kaan and Baris Guler, the interior minister`s son, have both denied accusations of involvement in bribery relating to urban development projects and the allocation of construction permits.

In response to the police crackdown, a number of police commissioners have been removed from their posts, including the head of police in Istanbul.

The economy minister, in his statement, said he was stepping down "so that all the light may be laid on this ignoble operation that targets our government". It was obvious the police raids had been a "set-up", he added.

Muammer Guler had earlier argued there were no legal grounds for his son`s arrest for bribery as he was not a public official.

He said on Wednesday he had originally offered his resignation to the prime minister on 17 December, the day of his son`s arrest. "Today I have submitted it in written form."

Mr Caglayan had just returned to the capital, Ankara, on Tuesday night at the end of a trip to Pakistan with the prime minister. He appeared with Mr Erdogan in front of a crowd of supporters at Esenboga airport hours before his resignation was announced.

The opposition had demanded that both ministers step down and on Sunday anti-government protesters took to the streets of Istanbul demonstrating against the scandal.

The prime minister came to power in 2002 as head of the Islamist-rooted AK Party and commentators say the arrest of figures linked to the government and the subsequent police dismissals are part of an internal party feud.

Islamic scholar Fethullah Gulen, in exile in the US, is seen as a rival to Mr Erdogan, and his Hizmet movement has supporters in the police and judiciary.

Mr Erdogan himself has referred to a "dark plot" by forces outside Turkey.

Addressing supporters at the airport late on Tuesday, he said the 17 December arrests had targeted "the national will, the people", the Hurriyet newspaper reported.

"I believe those who say the people will win and those who aspire to humiliate will lose again."

`Shoe boxes`
Among those arrested by investigators were the son of Environment Minister Erdogan Bayraktar, the chief executive of state-run Halkbank, Suleyman Aslan, and a mayor of a conservative area of Istanbul.

The head of Halkbank has been charged with receiving bribes. Turkish media report that $4.5m (£2.7m; 3.2m euros) in cash was found in shoe boxes at his home.

His bank, one of Turkey`s biggest, has drawn criticism in the US for enabling the purchase of Iranian natural gas in return for Turkish gold. An Iranian-Azerbaijani businessman was one of those detained, on suspicion of involvement in irregular financial transactions.

Halkbank has insisted the practice was lawful before it was stopped in June as a result of EU and US sanctions on Tehran.

The Turkish government says the corruption scandal has wiped more than $1bn from the bank`s market value.