Polar vortex: temperatures drop below freezing in all 50 US states - VIDEO 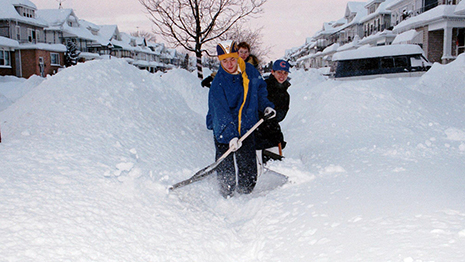 Temperatures in all 50 US states dipped below freezing on Tuesday in a rare nationwide chill that will keep a grip on much of the country for at least another day, with cutting winds and blizzards posing the most danger.

Florida, a state that normally basks in its reputation as a warm winter escape, experienced unusually low temperatures. In the midwest, northeast and eastern Canada, it was dangerous to venture outside. At some point on Tuesday, at least one location in each of the 50 US states recorded temperatures below freezing, with the highest point on Hawaii, Mauna Kea, recording a temperature of 21F (-6C).

The so-called polar vortex that funnelled an Arctic low pressure system into the upper US this week swung south and east on Tuesday. Polar conditions settled over two-thirds of the US.

It was colder in the southern state of Georgia than Alaska as Atlanta plunged to 6F (-14C) – the lowest temperature since 1966 – while Anchorage, Alaska, recorded 27F (-3C) . Wind chills were recorded around -60F in parts of Michigan, Minnesota, Montana and New Hampshire.

In northern Illinois, 500 Amtrak passengers spent the night on board three trains stranded in snow. The trains – the Southwest Chief from Los Angeles, the Illinois Zephyr from Quincy and the California Zephyr from the San Francisco Bay area – got stuck after 3pm Monday in blowing, drifting snow and ice that made the tracks impassable. The passengers were being bussed to their destinations on Tuesday.

The National Weather Service issued a blizzard warning for Western New York state, particularly along a line from Buffalo to Batavia. Accumulations of up to two feet were predicted. “Dangerously cold wind chills will pose a risk for frost bite and hypothermia for anyone outside for even very short periods of time. This is a life- threatening cold for those not in shelter,” the NWS said.

A “weather whiplash” sent temperatures in New York plunging 50 degrees fahrenheit. At lunchtime on Monday, it was 55F (13C) in Central Park; 24 hours later it was 5F (-15C). Authorities around the country have so far reported at least 14 weather-related deaths since last Friday, mostly resulting from traffic accidents.

It was so cold in Kentucky on Monday that an escaped prisoner turned himself in. Robert Vick, 42, escaped from a minimum-security prison on Sunday, the Associated Press reported, but as temperatures dropped through the floor on Monday he walked into a motel and asked the clerk to call the police so he could escape the freezing air.

Authorities at Toronto airport halted flights at Pearson international airport on Tuesday morning because the extreme cold was causing equipment to freeze. In all, more than 3,700 flights were canceled by late Monday afternoon, following a weekend of travel disruption across the US and southern Canada.

Across the region, airline officials said de-icing fluid was freezing, fuel was pumping sluggishly, and ramp workers were having difficulty loading and unloading luggage. JetBlue Airways stopped all scheduled flights to and from New York and Boston on Monday. Southwest ground to a halt in Chicago earlier in the day, but by the evening, flights resumed in "a trickle", a spokesman said.

Residents of south-east states were shocked to find the temperatures so low. “This is severely cold for these parts, a rare event,” said Brian Lynn, a National Weather Service meteorologist in Georgia.

Monica Anderson and Tommy Howard jumped up and down and blew on their hands while they waited for a bus, struggling to stay warm.

Anderson said she couldn`t recall it ever being so cold. "I`m not used to it. It is best just to stay inside until it gets better," said Anderson, who had to get out for an early morning appointment with her doctor.

Citrus growers in Florida reported that so far the low temperatures had not lasted long enough to spoil their fruit crops – and a sharp drop followed by a rise on the thermometer could even make the current orange crop sweeter.

The Tennessee Valley Authority, the biggest public utility in the South, said preliminary figures showed demand for electricity Tuesday morning reached the second-highest winter peak in the history of the Depression-era TVA.

PJM Interconnection, which operates the power grid that supplies more than 61 million people in the mid-Atlantic states, the midwest and south, asked users to conserve electricity because of the cold.