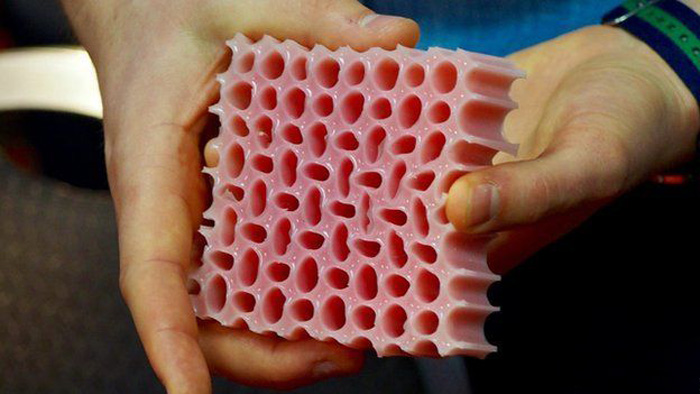 Physicists are abuzz with possibilities for "metamaterials" that can be designed to have surprising properties.

Tweaking the structure of materials to manipulate things like their appearance is already fairly well-known; the next phase is changing their mechanics.

A major conference is alive with ideas, designs and samples including springy ceramics, unfeelability cloaks and programmable rubber sponges.

They could help build spacecraft tiles or even terrain-sensitive shoe soles.

"I think this idea of metamaterials is slowly migrating into different areas," said Prof Martin Wegener, from the Karlsruhe Institute of Technology in Germany.

"Originally the excitement was all about electromagnetism - and then it went to totally different areas like thermodynamics and, lately, mechanics."

Prof Wegner also told the BBC that the term "metamaterial" has been applied to all sorts of weird and wonderful designs, without much consistency - but that it usually refers to a case where unusual properties jump out, which would not be expected from the original ingredients.

Prof Wegener works on cloaking, but his aim is not to make things invisible. He wants to hide them from physical forces, and last year his lab produced a honeycomb-like material that made an object beneath it unfeelable.

This particular metamaterial was a solid lattice that acts like a fluid in certain ways, deflecting pressure around its hidden cargo.

Now the tiny, hidden cylinder was very small in that case (less than 1mm) but related work by Prof Wegener`s team was picked up by French physicists and engineers, who showed that a careful pattern of drilled holes could divert damaging earthquake vibrations.

Turning the ground itself into a sort of metamaterial, it seems, might go so far as to protect a power station from a tremor.

Here at the American Physical Society`s March Meeting, Prof Wegener presented his latest work - which includes cloaking a hole at the centre of a flat sheet - saying: "It’s a design principle. You can apply it to anything you want."

Elsewhere at the meeting, Bastiaan Florijn, a final-year PhD student at Leiden University in the Netherlands, showed reporters what he calls the first ever mechanically "programmable" material.

It is a surprisingly low-tech looking slab of rubber, punched with an array of holes. But those holes, of two sizes, are specifically designed so that they can compress either vertically or sideways - and that switch is controlled by adding a small clamp.

The end result is a sort of oversized sponge that can be stiff, or soft, or flit between the two at a specific stage of the squeeze.

If it switches to become softer while still under pressure, this is known as "negative stiffness" - a property so weird that Mr Florijn said he still hasn`t worked out an application for it.

But the slabs have another property that could be immensely useful: they absorb energy.

"Imagine a car bumper that you can program - for instance, if you drive in a neighbourhood with a lot of small kids, you want to have a very soft bumper," Mr Florijn said.

"But then if you`re going fast on the highway, you want it to be stiff." He and his colleagues are also talking to shoe companies, who are interested in producing soles that adjust to different terrain.

Prof Katia Bertoldi of Harvard University also studies strange, elastic materials like this, which have a negative "Poisson ratio".

This means that when you compress them, instead of squashing out to the sides and getting both flatter and wider, they actually shrink in all directions.

Then when stretched, they expand in all directions. Prof Bertoldi`s team has engineered various useful properties into such materials, including making them absorb sound at different frequencies when squeezed.

The Poisson ratio can also affect fatigue in a metal - so she has worked with Rolls Royce to design engine components with complex slits wound into them, which withstand many more cycles of compression before breaking.

To get unique properties, Prof Bertoldi said, "we can either engineer complex building blocks, or use simple ones and arrange them in an interesting way".

A team at the California Institute of Technology, meanwhile, has made very small ceramics that do something entirely unprecedented: they spring back after being squashed by up to 50%.

They used a technique that builds material one atomic layer at a time, to create a network of hollow ceramic tubes.

The tube walls are just a few nanometres thick (millionths of a millimetre) and the whole lattice is thinner than a piece of paper.

"I could have several in my hand now and you wouldn’t know," said PhD student Lucas Meza.

Their raw material is aluminium oxide, which is stronger than steel - but like most ceramics, it is usually terribly brittle.

With the right thickness in the tube walls, however, these tiny specimens simply rebound from a blow. They are still far, far too small to be useful, but with enough investment Mr Meza is sure the ceramics will find a home, particularly "in places where our normal materials don`t work".

Spacecraft or jet engines, for example, might use ceramic tiling rather than a metal shell, in order to withstand heat.