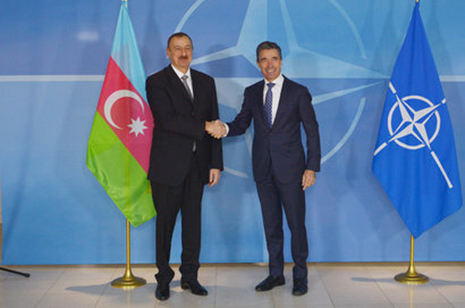 President of Azerbaijan Ilham Aliyev has met Secretary General of NATO Anders Fogh Rasmussen as part of his working visit to Brussels.

The NATO Secretary General congratulated President Ilham Aliyev on his re-election, and wished him successes in his activities.

Anders Fogh Rasmussen recalled the Azerbaijani President`s visit to NATO and his own visit to Azerbaijan in 2012, saying the visits saw the country and the organization conduct fruitful discussions. He praised NATO-Azerbaijan relations, as well as the country`s assistance to the organization`s peacemaking operations in Afghanistan through transit lines and funding.
The NATO Secretary General said Azerbaijan was an important country in terms of ensuring energy security of Europe and peace and security in the Caucasus.

President Ilham Aliyev hailed Azerbaijan-NATO relations, saying they were developing in a variety of areas. The President noted the importance of Azerbaijan`s active contribution to ensuring Europe`s energy security.

President Ilham Aliyev said Azerbaijan considered its relationship with NATO a crucial part of its Euroatlantic integration. The Head of State said he believed cooperation between the country and the organization would continue developing.