Minister: Azerbaijan can offer taxpayers majority of services used in the world 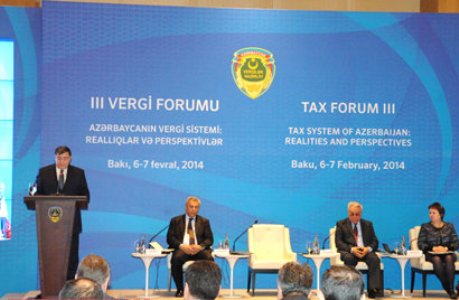 Currently, the tax system of Azerbaijan is able to offer taxpayers the majority of services used in the world, Azerbaijani Minister of Taxes Fazil Mammadov said at the third Tax Forum: "Azerbaijani tax system: realities and prospects" in Baku on Feb. 7.

"We are trying to build a system in which the taxpayer will be able to fulfill all tax obligations and not have to come to the tax body," Mammadov said.

Currently, the Ministry of Taxes offers over 50 electronic services to the population. This is the biggest collection of such services among all agencies, the minister noted.

"As a result of our dialogue with business, in 2014, the Ministry has begun a dialogue with taxpayers on the new basis - partnership agreements with entrepreneurs. At the same time, this is a new and more responsible approach to the usage of new mechanisms of tax control," Mammadov said.

The Minister expressed confidence that all participants will benefit from this partnership in the future.

According to his words, the Ministry is planning to create new tools directed at strengthening tax surveillance in a number of spheres.

"The mechanism of electronic audit will be launched in the medium term; we started the implementation of the pilot project in 2013. The work on regulation of transfer prices and surveillance mechanisms in the sphere of electronic trade will be continued, " the Minister added.