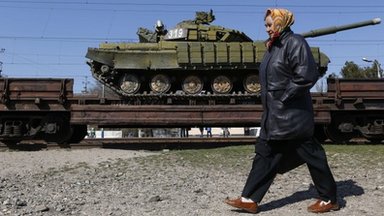 Russia has reportedly withdrawn some troops, but the exact number is unclear
Nato foreign ministers are due to discuss ways to help Ukraine and reassure allies in Eastern Europe, at a meeting in Brussels.
It is the first time ministers from the 28 member states have convened since Russia`s takeover of Crimea caused a diplomatic crisis.

On Monday, Russia ordered a partial withdrawal of its troops from the border with Ukraine.

Russian President Vladimir Putin told German Chancellor Angela Merkel he had ordered the move, according to the German government.

Thousands of Russian soldiers are still said to be deployed along the eastern border of Ukraine.