Tensions Soar Amid Protests Over Press Freedom In Georgia 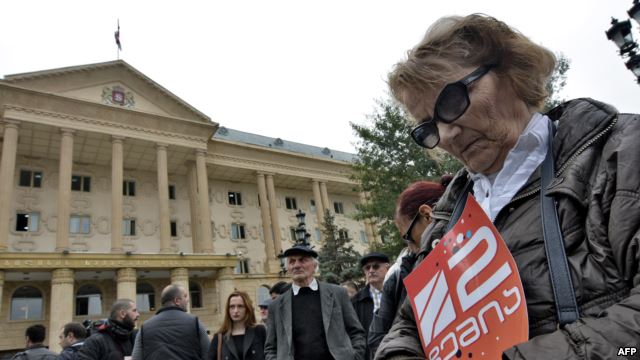 Hundreds of protesters have rallied in Tbilisi against the Georgian government`s alleged attempts to silence the country`s biggest and most popular television channel, raising fears of a political crisis.

As many as a thousand protesters railed on October 22 against an apparent clampdown on press freedom prompted by a legal battle for control of Rustavi 2 TV, which the government accuses of being a mouthpiece for the main opposition party.

The protesters raised placards reading "Hands off Rustavi 2 TV" and "Rustavi 2 belongs to people" on a day of rising tensions that prompted President Giorgi Margvelashvili to call for calm in a nationally televised address.

The Organization for Security and Cooperation in Europe (OSCE) warned that the ownership dispute between the TV station and a businessman close to the ex-Soviet government could harm media freedom.

A court froze the broadcaster`s assets in August after the businessman, Kibara Khalvashi, who sold his controlling stake in the station a decade ago, began legal action to retake control of the network.

Dunja Mijatovic, the OSCE representative on freedom of the media, said the court seizure of the station`s assets was causing "significant financial and logistical constraints, effectively limiting its capacity to operate freely."

"If not lifted soon, the court order will entail serious restrictions on the diversity and plurality of the media in the country," she said.

The situation is especially worrisome as parliamentary elections in Georgia are scheduled for next year, Mijatovic said.

"Democracy requires that people have access to diverse sources of information."

Hearings on the case, which have been picketed by hundreds of National Movement activists, will resume on October 26.

"The government has decided to hand Rustavi 2 ownership over to a man under its control, and that will amount to a closure of the country`s most influential TV channel," Rustavi 2 deputy director Zaal Udumashvili told AFP.

"That will put an end to media pluralism in Georgia and threaten the very existence of Georgian democracy."

Khalvashi, the businessman seeking to gain control over the station, denies that he intends to shut it down.

But he has recently echoed assertions by the government that Rustavi 2 "carries out political orders" from the opposition National Movement party of former President Mikheil Saakashvili.

A group of civil society and media organizations recently denounced interference with the station, and said it "calls into question any dissent or critical opinions in the media" in the Caucasus nation of 3.7 million.

In recent months, several privately-owned television stations have shut down popular political talk shows and fired prominent journalists after coming under criticism from the government.

The United States has warned that "the appearance of...constricting media freedoms or compromising media pluralism [is] disturbing."

The mounting protests prompted an emergency televised address October 22 by President Margvelashvili, who denies the government is involved in the court case against Rustavi 2 says he supports a free press.

Margvelashvili said the turmoil over the channel "threatens constitutional order" and sets the stage for "social confrontation."

Margvelashvili said he would consult with political parties, civil society activists, and journalists "to find ways to maintain social stability and constitutional order."

He warned that developments in the court case could lead to civil disturbances, and called on the court "not to take a hasty decision."

With tensions rising, Margvelashvili clashed with his own Prime Minister Irakli Garibashvili after the latter called the National Movement a "criminal organization" which "has no right to remain in politics."

Margvelashvili chastised Garibashvili for the accusation, saying it "only added tension to an already difficult situation."

Margvelashvili won office in 2013 as an ally of Georgian billionaire Bidzina Ivanishvili, but has since sought to carve out an independent role.

Ivanishvili`s party won the 2012 parliamentary vote by a landslide, but it is now trailing in opinion polls behind the National Movement with the 2016 vote looming.

Adding to the controversy, last year the TV channel`s founder and former owner, Erosi Kitsmarishvili, was found dead in his car after he claimed the government saw him as an obstacle to its alleged plan to seize control of the station.

Police said he was found with a gunshot wound to the head.