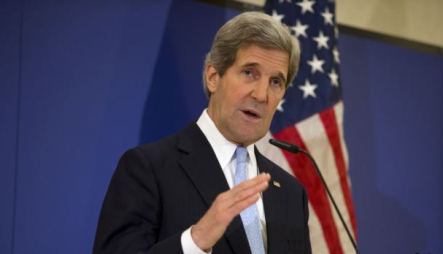 US Secretary of State John Kerry has accused Russia of `distraction, deception and destabilisation` in eastern Ukraine.
Earlier, Russia called on the US to make Kiev stop raids on pro-Moscow separatists in the east.

Russia ordered new military exercises on its border following the raids, drawing condemnation from Ukraine.
Moscow has tens of thousands of troops along its side of the border and on Friday the acting Ukrainian Defence Minister Mikhail Koval told the Interfax-Ukraine agency that they had come within a kilometre of the border.

The news comes amid an increasing war of words between the US and Russia over events in eastern Ukraine.

Mr Kerry praised the interim authorities in Kiev, saying they had honoured the agreement struck in Geneva on 17 April to de-escalate the crisis.

But he said Russia had `put its faith in distraction, deception and destabilisation` and said they had failed to call for separatists to leave official buildings and give up their arms as stipulated by the Geneva agreement.
He also accused Russian media of promoting President Vladimir Putin`s `fantasy` about events in Ukraine.

Mr Kerry said US intelligence was confident that Russia was `playing an active role in destabilising eastern Ukraine` with personnel, weapons, money and operational planning`.

He added that the US was ready to impose further sanctions if Russia did not change course.