Most Terrifying Civilizations In the History of the World - PHOTOS

The Spartan family was quite different from that of other Ancient Greek city-states. The word “spartan” has come down to us to describe self-denial and simplicity. This is what Spartan life was all about. Children were children of the state more than of their parents. They were raised to be soldiers, loyal to the state, strong and self-disciplined.

Despite their PG-13 portrayal by Hollywood in the movie ‘300’ that didn’t do their civilization justice, the Spartans were actually pretty hardcore. Just to get a basic understanding of their culture think about this – Every single Spartan male was a soldier. Every other job was done by slaves; the Spartan men were warriors and that was that. They fought until they could finally retire at the age of 60. And if that wasn’t enough dyin didn’t earn him a headstone, he didn’t deserve it. The only Spartans who got marked headstones were the ones who died in battle, during victory. In those times as only the ones who perished in battle got to have their graves marked for the future generations to marvel at their heroism. And if someone lost his shield during battle, he got the death penalty. A true soldier would have gone back to get it, or died trying.

The Māori are the indigenous Polynesian people of New Zealand. Being the first settlers of New Zealand, they had made quite a reputation for themselves by virtually consuming all unwelcome guests until the 18th century. They believed devouring their enemies’ flesh made them stronger by acquiring their strength and combat skills. They had been known to practice cannibalism during warfare. In October, 1809, a European convict ship was attacked by a large group of Maori warriors, in revenge for the mistreatment of a chief’s son. The Maori killed most of the 66 people on board, and carried dead and alive victims off the boat and back to shore to be eaten. A few lucky survivors, who were able to find a hiding spot inside the mast of the boat, were horrified as they watched the Maori devour their shipmates through the night and in to the next morning.

The Vikings were seafaring northern Germanic people who raided, traded, explored, and settled in wide areas of Europe, Asia, and the North Atlantic islands from the late 8th to the mid-11th centuries. Notorious for terrorizing and pillaging through Europe, they were ferocious warriors who never shied away from battle. Their physical strength was only outmatched by their skills on the battlefield and the use of diverse weapons such as axes, swords and spears. Perhaps the only civilization whose religion was also about war, the Vikings firmly believed that all people had a purpose in this life and theirs was to fight to the death. They were all you would want in a soldier and proved it on the battlefield by destroying all in their paths.

Historically, the term “Apache” has been used for Comanches. The Comanche are a Plains Indian tribe whose historic territory, known as Comancheria (New Mexico, southeastern Colorado, southwestern Kansas, western Oklahoma, and most of northwest Texas). Known for their fearlessness in battle, they were like the ninjas of America. They were not like the most Native Americans gladly gave up their land, women and stock for booze and casino licenses. They made up for the use of primitive weapons made from bone and stone with astounding cunning and combat skills. They would sneak up behind you and slit your throat, without you even knowing. They were also the greatest knife fighters the world has ever seen, and were pretty good with the tomahawk and throwing ax. They terrorized the southwest United States, and even the military had trouble beating them. They were great hit and run fighters, and their descendants teach modern day special forces how to fight in hand to hand combat. They usually scalped their victims. 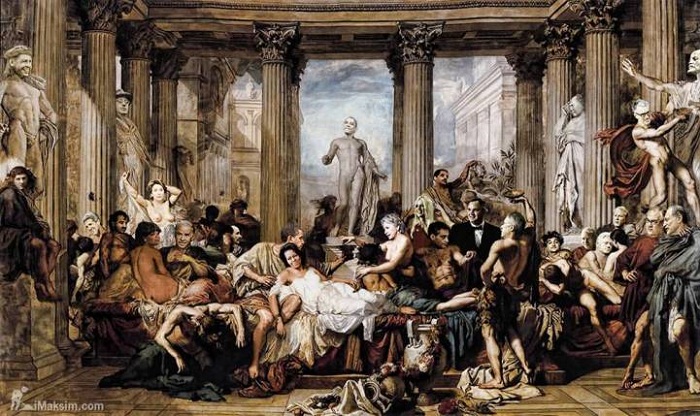 The Roman Empire included most of what would now be considered Western Europe. The empire was conquered by the Roman Army and a Roman way of life was established in these conquered countries. The main countries conquered were England/Wales (then known as Britannia), Spain (Hispania), France (Gaul or Gallia), Greece (Achaea), the Middle East (Judea) and the North African coastal region. While Rome is possibly the greatest empire, you just can’t ignore some scariness. Criminals, slaves and others were forced to fight each other to the death in gladiatorial games. Some of the most evil men were Roman – Caligula, Nero and others. Christians were first, and horribly, targeted for persecution as a group, by the emperor Nero, in 64 AD. Some were torn apart by dogs, others burnt alive as human torches. At first they were ruled by divine kings, then they became a republic (perhaps their greatest period) before finally becoming an empire. How a group of farmers, who started off fending off wolves to protect their livestock, eventually became the greatest empire in all history is the stuff of legends. Coupled with an excellent military and administrative system, the Roman Empire, or rather ancient Rome, is also one of the longest-lasting. Counting from its founding to the fall of the Byzantine Empire, ancient Rome lasted for a whopping 2,214 years!

Nazi Germany, also known as the Third Reich, is the common name for Germany during an era where the country transformed from a democratic Republic to a totalitarian state, being ruled by Adolf Hitler as the leader of the National Socialist German Workers’ Party (NSDAP) until their destruction by Allied Forces in May, 1945. Although it was a very brief civilization, and a superpower, and affected the world greatly. At least 4 million people were killed in the Holocaust and Nazi Germany started the worst war in human history – World War II. The Nazi Swastika is probably the most hated symbol in the world. Nazi Germany owned about 268,829 square miles of land. Hitler was one of the most influential people ever and his empire was, by far, one of the most terrifying. 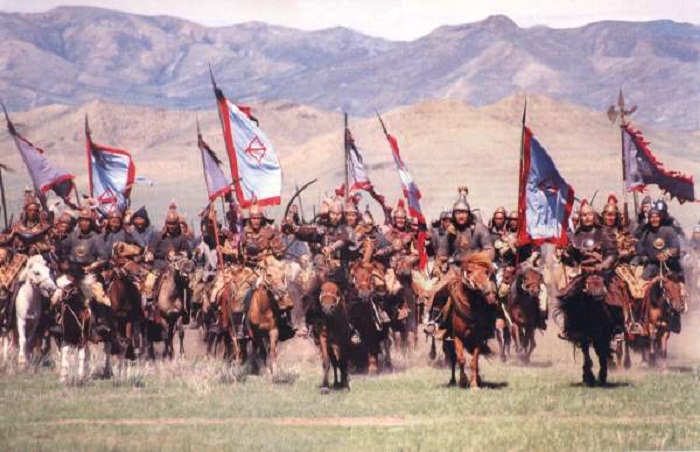 The Mongol Empire existed during the 13th and 14th centuries AD, and was the largest contiguous land empire in human history. The Mongol Empire emerged from the unification of Mongol and Turkic tribes of historical Mongolia under the leadership of Genghis Khan.

The Mongols were considered barbarians and savages. They dominated Europe and Asia and were most famous for riding on horseback, lead by one of the greatest military commanders in history, Genghis Khan. They were highly disciplined and masters with using the bow and arrow on horseback. They used a composite bow that could rip through armor, and were also pretty good with lances and scimitars. They were masters of psychological warfare and intimidation, and built the second largest empire ever, smaller only than the British Empire. It all started when Genghis Khan vowed in his youth to bring the world to his feet. He almost did. Then he set his sights on China, and the rest is history.

During an invasion of India, they built a pyramid in front of the walls of Delhi out of human heads. They, like the Celts, had a thing for severed heads. They liked to gather them up and catapult them inside the enemy’s compound. They would also fling corpses infected with black death. When they ran across pregnant women, they did… things. Things we won’t discuss here.

Communism is responsible for millions of deaths – more, even, than Nazi Germany in just the Soviet Union alone. Communists such as Josef Stalin, Mao Zedong, Pol Pot, Nicolae Ceausescu and others have killed millions of people. But The Soviet Union stands out as the worst. Stalin, alone, killed 10-60 million people. The Soviet Union was probably one of the U.S.A’s greatest foes. Living under Stalin put even the most average person into a state of constant fear – this, alone, makes the Soviet Union worse than Nazi Germany, in which the majority of Germans felt a certain level of safety as long as they supported the Nazi concept.

The Celts were a group of peoples that occupied lands stretching from the British Isles to Gallatia. The Celts had many dealings with other cultures that bordered the lands occupied by these peoples, and even though there is no written record of the Celts. They had a large reputation as head hunters, and were famous for putting victim’s heads on their chariots, and in front of their homes. Many Celts fought completely naked and are famous for their iron long sword: “They cut off the heads of enemies slain in battle and attach them to the necks of their horses. The blood-stained spoils they hand over to their attendants and striking up a paean and singing a song of victory; and they nail up these first fruits upon their houses, just as do those who lay low wild animals in certain kinds of hunting. They embalm in cedar oil the heads of the most distinguished enemies, and preserve them carefully in a chest, and display them with pride to strangers, saying that for this head one of their ancestors, or his father, or the man himself, refused the offer of a large sum of money. They say that some of them boast that they refused the weight of the head in gold”.

The Aztec people were certain ethnic groups of central Mexico, particularly those groups who spoke the Nahuatl language and who dominated large parts of Mesoamerica from the 14th to 16th centuries.

The Aztecs began their elaborate theocracy in the 1300s, and brought human sacrifice to a golden era. They believed that for every 52 years that passed, the world would end unless the gods were strong enough. And, as is common knowledge, the best way to toughen up a god is with a steady stream of constant human sacrifice (along with a dash of cannibalism, just for good measure). About 20,000 people were killed yearly towards keeping their Sun god happy. Hearts of sacrifice victims were cut out, and some bodies were eaten ceremoniously. Other victims were drowned, beheaded, burned or dropped from heights.

And that’s not even the bad part. In a rite to the rain god, shrieking children were killed at several sites so that their tears might induce rain. During the sacrifice to the fire god, a newly-wed couple would be tossed into, you guessed it, a fire. Then, right before they finally died (from their horrendous burns), they’d drag them out, flesh still smoking, and dig out their hearts. In a rite to the maize goddess, a virgin danced for 24 hours, then was killed and skinned; her skin was worn by a priest in further dancing. One account says that at King Ahuitzotl’s coronation, 80,000 prisoners were butchered to please the gods. It is said that sometimes the victim would be cannibalized.