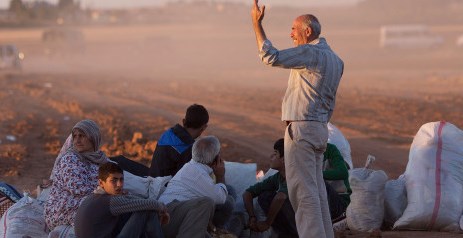 Turkey`s parliament authorized the government on Thursday to order military action against Islamic State as the insurgents tightened their grip on a Syrian border town, sending thousands more Kurdish refugees into Turkey.

The vote gives the government powers to order incursions into Syria and Iraq to counter the threat of attack "from all terrorist groups," although there was little sign any such action was imminent.

The mandate also allows foreign troops to launch operations from Turkey, a NATO member that hosts a U.S. air base in its southern town of Incirlik, but which has so far resisted a frontline role in the military campaign against the insurgents.

"The rising influence of radical groups in Syria threatens Turkey`s national security. ... The aim of this mandate is to minimize as much as possible the impact of the clashes on our borders," Defense Minister Ismet Yilmaz told parliament.

Islamic State fighters advanced to within a few km (miles) of the mainly Kurdish border town of Kobani on three sides on Thursday, extending their gains after taking control of hundreds of villages around the town in recent weeks.

Smoke rose behind hills to the south of Kobani as the insurgents continued their shelling into the night. Dozens of anti-tank missiles with bright-red tracers flashed through the sky as darkness enveloped the town.

In neighboring Iraq, which also borders Turkey, the insurgents have carried out mass executions, abducted women and girls as sex slaves, and used children as fighters in what may amount to war crimes, the United Nations said.

They took control of most of the western Iraqi town of Hit early on Thursday in Anbar province, where they already control many surrounding towns, launching the assault with three suicide car bombs at its eastern entrance.

U.S.-led forces, which have been bombing Islamic State targets in Syria and Iraq, hit a village near Kobani on Wednesday. Sources in the town, which is known as Ayn al-Arab in Arabic, reported strikes farther south overnight.

The U.S. Central Command reported that U.S. and other forces in the coalition conducted four strikes on Wednesday and Thursday in Syria and seven in Iraq. Targets included buildings, tanks and other armed vehicles.

But such strikes seemed to have done little to stop the Islamists` advance.

"We left because we realized it was only going to get worse," said Leyla, a 37-year-old Syrian arriving at the Yumurtalik border crossing with her six children after waiting 10 days in a field, hoping the clashes would subside.

"We will go back tomorrow if Islamic State leaves. I don`t want to be here," she said.

Kurdish militants in Turkey warned that peace talks with Ankara, meant to end a three-decade insurgency, would collapse if the Islamist insurgents were allowed to carry out a massacre.

The British-based Syrian Observatory for Human Rights, which monitors Syria`s war, said Islamic State militants were clashing with Kurdish fighters hundreds of meters from Kobani, raising fears they would enter the town "at any moment."

It said it confirmed the deaths of 16 Islamic State fighters and seven Kurdish militants but that the true toll was likely to be higher.

About 20 explosions were heard in the areas of the Tishrin dam and town of Manbij 50 km (30 miles) south of Kobani overnight, resulting from missile strikes believed to be carried out by the coalition, the observatory said earlier.

Asya Abdullah, a senior official in Syria`s dominant Kurdish political party the Democratic Union Party (PYD), said there were clashes to the east, west and south of Kobani and that Islamic State had advanced to within 2-3 km on all fronts.

"If they want to prevent a massacre, (the coalition) must act much more comprehensively," she told Reuters by phone from Kobani, adding that air strikes elsewhere in Syria had pushed Islamic State fighters towards the border town.

The Turkish parliamentary vote extended a mandate initially intended to allow Ankara to strike Kurdish militants in northern Iraq and to defend itself against any threat from Syrian President Bashar al-Assad`s forces.

But it does not necessarily signal imminent action. President Tayyip Erdogan insists U.S.-led air strikes alone will not contain the Islamic State threat and is calling for the removal of Assad, an aim not shared by the U.S.-led military coalition for the current military campaign. Ankara is unlikely to act alone.

The Turkish army has, however, vowed to defend the tomb of Suleyman Shah, grandfather of the founder of the Ottoman Empire, in a Turkish enclave in northern Syria, telling its troops there it would rush to their defense if needed.

"One call and we will immediately be at your side," Chief of the General Staff General Necdet Ozel said in a statement.

Ankara is also reluctant to take action that may strengthen Kurdish fighters allied to the Kurdistan Workers Party (PKK), a militant group that has fought the Turkish state for three decades and with which it is conducting fragile peace talks.

"If this massacre attempt achieves its goal it will end the process (with Turkey)," PKK leader Abdullah Ocalan said in a statement released by a pro-Kurdish party delegation which visited him on Wednesday in his island prison near Istanbul.

"I urge everyone in Turkey who does not want the process and the democracy voyage to collapse to take responsibility in Kobani," he said in the statement.

Kurdish forces allied to the PKK, the People`s Defense Units (YPG), are fighting against the Islamic State insurgents attacking Kobani. The PKK is designated a terrorist group by Turkey, the United States and European Union.

A spokesman for the YPG said a U.S. citizen, Jordan Matson, had joined Kurdish forces in their fight in Syria.

`HELL OF A LONG FIGHT`

Islamic State has carved out swathes of eastern Syria and western Iraq in a drive to create a cross-border caliphate, terrifying communities into submission by slaughtering those who resist.

U.S. Vice President Joe Biden said in a speech on Thursday that the battle to stop the Islamic State militants` advance in Syria and Iraq was going to be a "hell of a long fight" for the United States and its coalition partners.

In a speech at Harvard, he defended the U.S. decision to wait until last month to begin air strikes against Islamic State targets in Syria, saying Washington needed to wait for nations including Saudi Arabia and Qatar to be willing to offer support.

The United States has been carrying out strikes in Iraq against the militant group, which is commonly known by its former acronym of ISIS, since July and in Syria since last week with the help of Arab allies. Britain and France have also struck Islamic State targets in Iraq.

U.S. Defense Secretary Chuck Hagel said on Thursday he discussed with France its possible involvement in the U.S.-led campaign in Syria. But his French counterpart, Jean-Yves Le Drian, would not be drawn on whether Paris might join in air strikes.

Iraqi Kurdish troops drove Islamic State fighters from a strategic border crossing with Syria on Tuesday and won the support of members of a major Sunni tribe, in one of the biggest successes since U.S. forces began bombing the Islamists.

Islamic State fighters on the border with Turkey have yet to be dislodged.

"(Islamic State) is Turkey`s greatest existential threat since 1946, when Joseph Stalin demanded that Ankara cede control of the Bosphorus and other territory to the Soviet Union," said Soner Cagaptay, director of the Turkish Research Program at The Washington Institute.

"Erdogan and Prime Minister Ahmet Davutoglu know that only the United States has the necessary military hardware and intelligence assets to defeat ISIS in the long term," he said, forecasting that while Turkey would offer logistics and intelligence support, it was unlikely to back wholeheartedly a military strategy that does not target Assad.