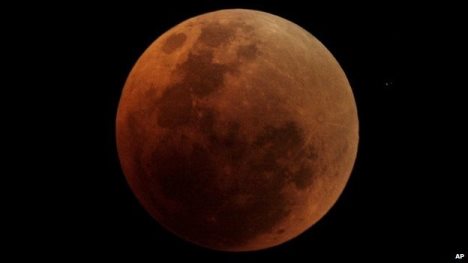 A total lunar eclipse will be visible across much of the Americas and Asia in the coming hours.

During the eclipse - which is the second to occur this year - our only natural satellite will be fully covered by the Earth`s shadow.

The Moon appears orange or red, the result of sunlight scattering off our atmosphere, hence the name Blood Moon.

Weather permitting, skywatchers in North America, Australia, western South America and parts of East Asia will be able to see the spectacle.

However, Europe, Africa and the eastern part of Brazil are missing out on the show.

The last total lunar eclipse occurred on 15 April, and the next is expected to take place on 4 April 2015.

There will be two full lunar eclipses again next year.
Broadcast live streaming video on Ustream