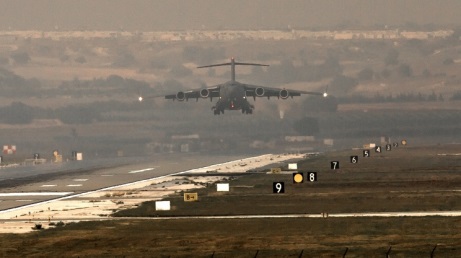 US representatives will raise the issue of using Incirlik Air Base in the negotiations with Turkey this week
The best help Turkey can provide the United States in the fight against the Islamic State threat is the use of Incirlik Air Base, head of the Pentagon Chuck Hagel said Friday during his visit to Colombia.
According to Hagel, US representatives will raise that issue in the negotiations with Turkey this week. Hagel noted that Turkey has military potential that can be used in the fight against the IS militants.
Despite Turkey`s claims US should create a buffer zone on the Turkish border with Syria, Washington isn`t actively considering that issue.
Up to UN to decide
Russian Foreign Ministry spokesman Alexander Lukashevich said Thursday the decision on a buffer zone on the border with Syria may only be made by the United Nations Security Council.
The speaker reminded what happened in Iraq, Libya when important decisions were made with no resolution from the United Nations Security Council.
The diplomat also said decisions made by separate states or coalitions on establishment of buffer zones are illegitimate.
NATO to protect Turkey
NATO`s new Secretary General Jens Stoltenberg on Thursday met Turkey`s Foreign Minister Mevlut Cavusoglu and discussed prospects for creating a no-fly and a buffer zone in Syria.
NATO secretary general also stated that the alliance will continue protecting Turkey form threats coming from the Islamic State organization.
Stoltenberg reminded about the deployment of Patriot missile defense systems near the border between Turkey and Syria. He said the systems will be used in defending Turkey`s southern border if case of necessity.
Recent developments in the fight against Islamic State on Syria`s soil
According to Russian Foreign Ministry spokesman Alexander Lukashevich, Islamic State (IS) militants seized 70 villages in the vicinity of the city of Kobani.
Jihadists use the tactic of deploying their detachments in inhabited localities and often use civilians as a human shield.
A Franciscan priest and 20 Christians were recently captured in the country’s northwest.