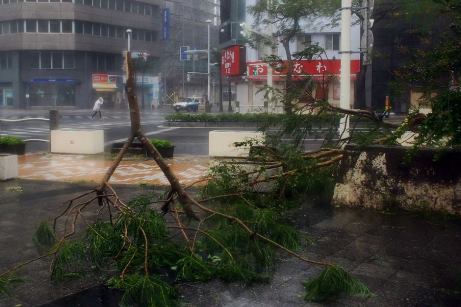 A powerful storm that battered Japan with high wind and torrential and killed two people headed off out over the Pacific on Tuesday and was downgraded to a tropical depression.

Typhoon Vongfong, at one point the strongest storm to hit Japan this year, was on Tuesday afternoon off the coast of the Tohoku region deviate by a 2011 earthquake and tsunami, the Japan Meteorological Agency said.

After the storm passed through western Japan, a 90-year-old man in was found dead in a field irrigation ditch, while a 72-year-old man drowned. Another person was missing and nearly 100 people were injured.

Vongfong brought heavy rain to Tokyo through the night and snarled traffic across much of the country on the last day of a three-day holiday weekend. More than 600 flights were canceled nationwide on Monday and more than 60 cancellations were expected on Tuesday, the NHK broadcaster said.

The sun returned to Tokyo on Tuesday morning and commuter train services were getting back to normal but heavy rain pounded northern Japan.

High tides flooded coastal areas in Kesennuma city, where land along the water sank because of the 2011 earthquake.

More than 800,000 people nationwide had been urged to leave their homes, while more than 150,000 homes lost power, NHK said.

Tokyo Electric Power Co, the operator of the crippled Fukushima nuclear power plant, said on Monday it had increased water transfer and storage capacity to prevent an overflow of radioactive water being stored at the plant.