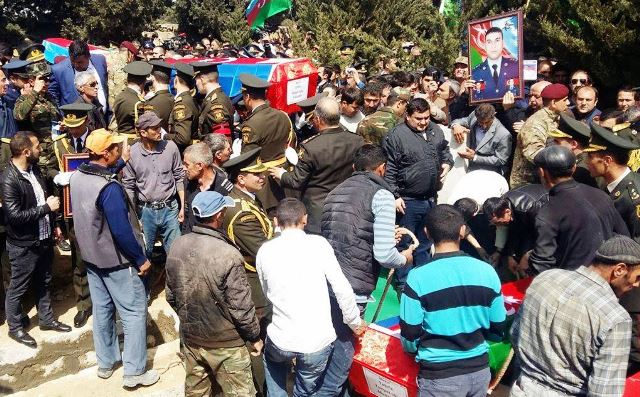 The pilots of the Azerbaijani Air Force - Major Tabriz Musazade, Major Urfan Valizade and Senior Lieutenant Bakir Ismayilov and the officer of the Special Purpose Forces of the Azerbaijani Armed Forces, Lieutenant Colonel Murad Mirzayev, who lost their lives in the Armenian sabotage of April 2 on the contact line of Armenian and Azerbaijani troops, have been laid to rest in II Alley of Honor in Baku.
The bereaved relatives, state and government officials, MPs, Defense Minister Zakir Hasanov, Chief of the General Staff of the Armed Forces Najmaddin Sadikov, Military Prosecutor Khanlar Valiyev, Chief of the State Border Service Elchin Guliyev and representatives of the public attended the farewell ceremony.

Prayers were offered for the martyrs, a three-volley salute was performed and national anthem of Azerbaijan was played.

The Azerbaijani national flag covering the coffins were presented to the martyr’s relatives.

Slogan “Martyrs, they do not die (they are immortal), homeland (land, our land) is indivisible” was chanted during the funeral.