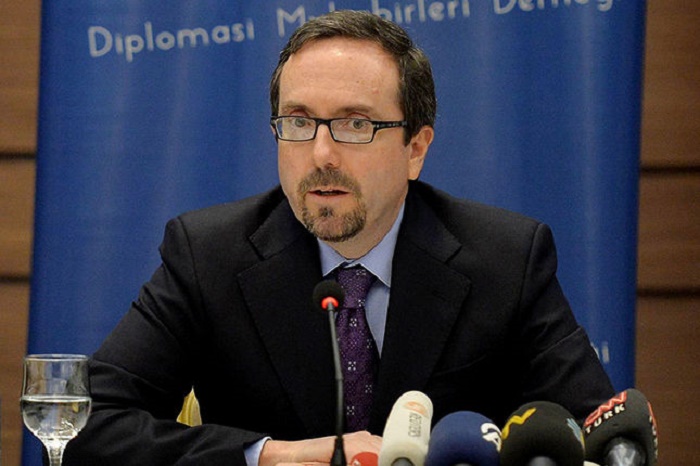 The U.S. Ambassador to Ankara John Bass has confirmed in a recent media report revealing that the U.S. Central Intelligence Agency (CIA) apologized to Turkey in a written statement regarding claims that allegedly revealed a controversial oil trade between Turkey and Daesh.
Speaking during a program broadcast on Turkish news channel NTV on Dec. 23, Ambassador John Bass said that the U.S. acknowledged that some of their initial assessments about allegations regarding Turkey`s oil trade with Daesh, "were either corrected or were off-target a bit."

Daily Sabah reported on Dec.16 that during the U.N. Security Council meetings in New York in September 2014, U.S. Secretary of State John Kerry implied that there are documents proving Turkey`s alleged oil trade with Daesh. While the Turkish side requested that the U.S. provide documented proof immediately, the U.S delivered the alleged documents in January 2015, after constant reminders from Turkey. According to information obtained by Foreign Ministry officials, after careful examination of the CIA`s documents, officials from the Turkish National Intelligence Agency (MİT) revealed that the geographic locations in the document that allegedly reveals Daesh`s oil trade was conducted with Turkey does in fact indicate that an asphalt plant located in Turkey`s southeastern Kilis province. Diplomatic sources also added that following this incident, U.S. officials accepted their mistake and the CIA apologized to Turkey in early 2015.

Daily Sabah contacted CIA headquarters in Langley, Virginia requesting that the report be confirmed but a CIA spokesman declined to comment on the matter and referred the inquiry to the State Department. In response, a State Department official also refused to speak about the details of this specific diplomatic conversation but said that the U.S. assessment on this issue had not changed.

Answering questions regarding the issuing of a possible apology, Ambassador John Bass refused to give detailed information but acknowledged that the apology took place, saying: "I don`t want to get deep into the communications that were made between individual ministries in government. I`d just say, look, we acknowledged that some of the initial assessments that we had were either corrected or were off-target a bit. We constantly do that. We admit when we make mistakes. We often wish that some other governments would do so as well," Bass said on Dec. 23

Commenting on media reports that point to U.S involvement in the assassination of Russia`s Ambassador to Ankara Andrey Karlov who was shot dead on Dec. 19, John Bass said he "categorically rejects" the allegations noting: ``With respect to these allegations that I`ve seen being raised in the Turkish media somehow implicating U.S. government involvement, I categorically deny those claims. There is no evidence to support that and I think it`s an outrageous claim that has no basis in evidence. We want nothing else – nothing better – than to ensure that diplomats around the world are protected and able to do their jobs, and we – I lost a good colleague four years ago, our ambassador to Libya – so any time there`s this kind of violence against a career diplomat, it hurts us deeply," he said.

Regarding the extradition of Fettullah Gülen who resides in the U.S and is the alleged leader of the Gülenist Terror Group (FETÖ), Ambassador Bass said that the judicial process is still ongoing: "In our judicial system, the less we say about a case, the more seriously we are taking it. And that`s perhaps a bit of a difference from the approach to similar cases here in Turkey where people talk about cases publicly without ever having an impact on the actual judicial case itself," Bass said.