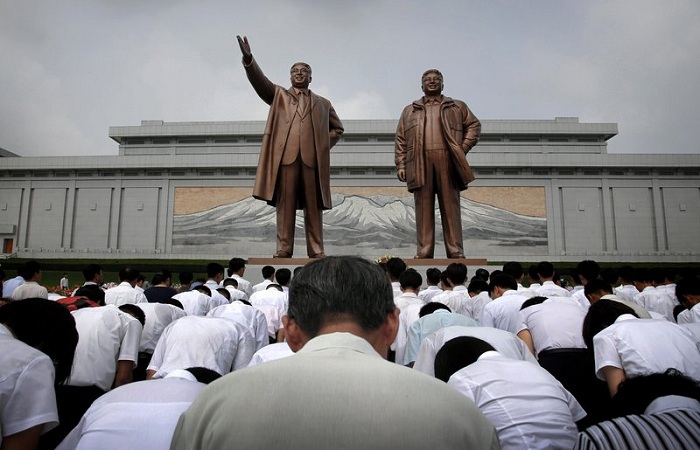 With somewhere around 4,000 artists and staff, the Mansudae Art Studio, a huge complex of nondescript concrete buildings on a sprawling, walled-off campus with armed guards in the heart of Pyongyang, churns out everything from watercolor tigers to mosaics so large they seem to depict a race from another, taller planet.

But its statues — the really big, bronze, monumental ones on foreign shores — are what appear to have caught the attention of the U.N. Security Council.

In one of the odder items on the list of things North Korea can`t export under United Nations` sanctions, statues were explicitly listed for the first time last month when the Security Council approved a raft of punishments in response to Pyongyang`s latest nuclear test, which it conducted in September.

To those familiar with the North`s exports, the move to ban statue sales wasn`t entirely a surprise. It`s one of the few things other than coal and natural resources, exports of which were also heavily restricted under the new sanctions, that North Korea can still find a market for abroad.

Moreover, sanctions advocates and proponents of isolating Pyongyang for its nuclear program believe Mansudae, and particularly its export arm, Mansudae Overseas Projects, is being used to quietly maintain, expand or obfuscate the nature of its relations with other countries.

Pyongyang began exporting statues to Africa in the late 1960s, when a wave of independence movements created a new market of ideologically friendly leaders in search of grand symbols to bolster national identity and claims of political legitimacy. North Korea, looking to expand its diplomatic ties vis a vis rival Seoul, initially provided the works for free. It only started selling them from about 2000.

In July, Namibia terminated the services of Mansudae Overseas Projects after U.N. monitors claimed it was involved in several military construction projects. Namibia had been a regular Mansudae customer, including the project to build its State House, which was completed in 2008.

But, on the bright side for Pyongyang, last December a $24 million museum with a huge indoor historical panorama built, designed and largely funded by Mansudae was opened near Cambodia`s ancient Angkor Wat temple complex. Unlike other projects by Mansudae abroad, it will collect proceeds from entry fees for the museum`s first 10 years of operations, or until it has recouped its investment. The museum hasn`t drawn many tourists.

The North`s total income from selling statues abroad has been estimated at about $160 million, or only about $10 million a year. That`s compared with the estimated impact of the new restrictions on coal exports, which the U.S. has said could cost Pyongyang as much as $700 million.

Even so, it`s a slap at one of North Korea`s most venerable cultural institutions.

Mansudae was created in 1959 by Kim Il Sung himself. It has generated an estimated 38,000 statues and 170,000 other monuments for domestic use and, according to the website of its overseas representative office, it is divided in 13 creative groups, seven manufacturing plants and has more than 50 supply departments.

"The vast majority of the major art works of the country have been realized by Mansudae Art Studio artists," the website says. "Their ages go from mid 20s to mid-60s and almost all are graduates of the very demanding Pyongyang University. Over half of the Merit Artists and of the People`s Artists, the two highest awards an artist can receive in DPRK, are or have been associated with the Mansudae Art Studio."

And, sanctions notwithstanding, they appear to be as busy as ever.

At the order of North Korea`s third leader in the Kim dynasty, Kim Jong Un, the studio rushed this year to make sure every province had a Kim Jong Il statue to stand beside his father.

Kim Jong Un is not yet the object of similar immortalizations or of the pins that all adult North Koreans wear over their hearts.

Mansudae officials say the young Kim is "much too humble of personality for that."