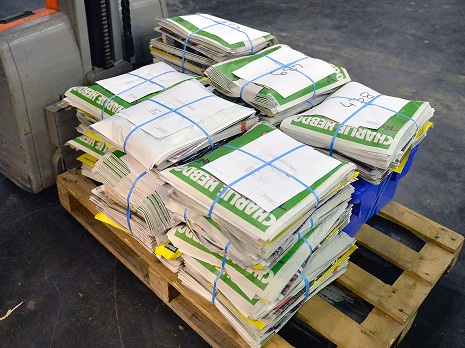 Three major cities will begin offering the newspaper starting Friday
Thousands of copies of Charlie Hebdo will go on sale in the United States beginning Friday, more than two weeks after the deadly terrorist attack on the satirical newspaper’s Paris office.

LMPI, a distributor of foreign magazines and newspapers in the U.S. and Canada, told TIME that 20,000 copies will be offered.

“New copies will be available in New York City, San Francisco and Los Angeles,” Martin McEwen, the company’s executive vice president of press distribution, said in a statement. “Chicago should receive copies early next week,” he added, and copies will also become available in other markets.

The new batch follows an initial and very light shipment of 300 copies that made it to New York, San Francisco and several specialized libraries.

Demand for the newspaper, which previously had a circulation of 60,000, has been unprecedented in the wake of the Jan. 7 attack, when two gunmen stormed the weekly’s Paris office and killed 12 people. Eight journalists were among the victims, including editor-in-chief Stéphane Charbonnier.

An initial printing of 1 million was quickly boosted to 3 million, and then 5 million, as it sold out. French press distributor MLP recently announced that figure would hit 7 million.

The issue released on Jan. 14, constructed by surviving staffers at a workspace offered by left-wing daily Libération, is fronted by a provocative cover drawn by Charlie Hebdo cartoonist Rénald Luzier, known as Luz. It features a depiction of the Prophet Muhammad holding a sign that reads “Je Suis Charlie,” a nod to the “I am Charlie” rallying cry in the aftermath of the attack, under the phrase Tout set Pardonné, or “All is forgiven.”

Al-Qaeda in the Arabian Peninsula claimed responsibility for the attack as the issue first hit newsstands, saying it was “vengeance for the Messenger of God,” in apparent retaliation for Charlie Hebdo‘s past mocking of the Prophet and Islam. Protests over the new cover have popped up in parts of the Middle East, Africa and Asia.