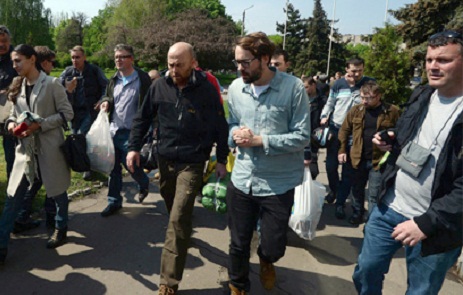 The deadly attack on the Ukrainian city of Mariupol in southern Donbas region was carried out from the northeast, RIA Novosti reported the statement of the Organization for Security and Co-operation in Europe (OSCE) Special Monitoring Mission (SMM)
"The SMM conducted a crater analysis and its initial assessment showed that the impacts were caused by Grad and Uragan rockets. According to the impact analysis, the Grad rockets originated from a north-easterly direction, in the area of Oktyabr (19 km north-east of Olimpiiska Street), and the Uragan rockets from an easterly direction, in the area of Zaichenko (15 km east of Olimpiiska Street)," the monitoring mission said in a statement.

The shelling occurred Saturday morning on the Olimpiiska Street about 8.5 km (5.3 miles) northeast of Mariupol city center and some 0.4 km (0.24 miles) from a Ukrainian Armed Forces checkpoint, causing “multiple impacts on buildings, retail shops, homes and a school,” the SMM said.

According to the local authorities’ latest estimates, the attack claimed the lives of 30 people.

Tensions have been on the rise in conflict-torn eastern Ukraine in January. Last week, 13 people were killed as a bus came under shelling in the city of Volnovaha in the Donetsk region.