Obama has no strategy for ISIL terrorist group: McCain 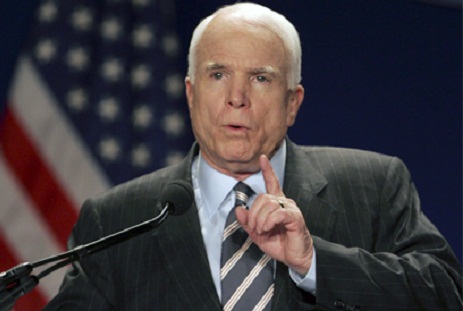 Chairman of the Senate Armed Services Committee John McCain has once again lashed out at President Barack Obama for having no strategy to deal with the ISIL terrorist group, Press TV reported.
“There is no strategy,” the Republican senator told CBS on Sunday.

“It is delusional for them to think that what they’re doing is succeeding,” he added.

McCain criticized the president after the US military announced that ISIL militants have lost only a tiny fraction of the territories they had captured in Iraq since US-led airstrikes began last year.

Pentagon spokesman John Kirby said on Friday that Iraqi and Kurdish forces have managed to retake only about 700 hundred square kilometers of the ground during the period.

"I think we all recognize that it`s a small percentage of the total right now. But we`re only six, seven months into this thing, too," said Kirby.

"ISIL had a big head start on us, coming into the summer. A pretty aggressive first quarter for those guys," he said.

The figure is around only one percent of the total captured lands which amount to 55,000 square kilometers.

The ISIL started its campaign of terror in Iraq in June. The US-led bombing campaign against ISIL positions in Iraq began in August.