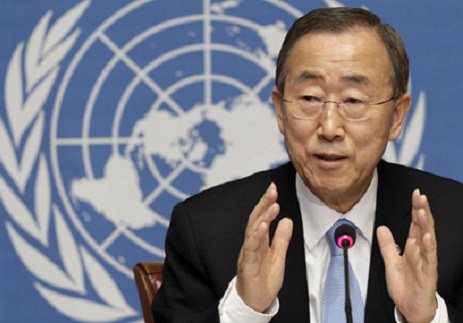 The Jan.24 shelling of Mariupol, a city in the southeast of Ukraine, is likely a violation of humanitarian law, UN Secretary General Ban Ki-moon has announced, calling on all sides of the Ukrainian conflict to restore peace and stability in the country, RIA Novosti reported.
According to a statement released by the United Nations on Jan.24, Ban Ki-moon "strongly condemns today`s rocket attack on the city of Mariupol, which reportedly killed dozens of civilians and left over one hundred injured. He notes that rockets appear to have been launched indiscriminately into civilian areas, which would constitute a violation of international humanitarian law".

The UN Secretary General stressed that peace must be "urgently restored" in Ukraine as it is "intrinsically linked to that of the broader region". The United Nations also said that Ban Ki-moon is urging all relevant parties "to redouble their efforts to revive the Minsk accords".

Mariupol was shelled on Jan.24, which led to the death of at least 30 civilians. According to the Special Monitory Mission (SMM) of the Organization for Security and Co-operation in Europe (OSCE), deployed in Ukraine, the Grad and Uragan rockets which hit about 8.5 km (5.3 miles) northeast of the city center were fired from the north-east direction.