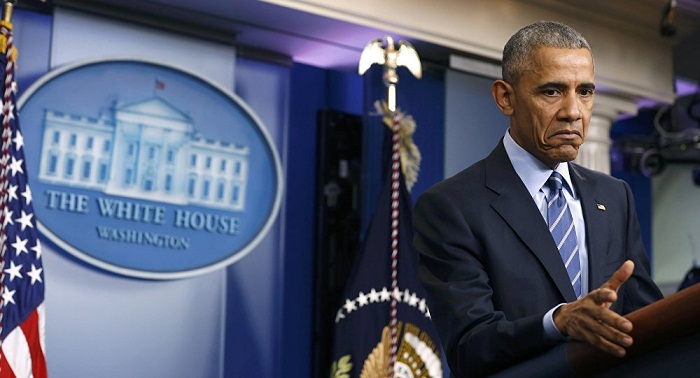 President Barack Obama defended his counterterrorism strategy in tumultuous Yemen Sunday, saying efforts to root out a dangerous al-Qaida affiliate there would not be affected by the political vacuum in the country, AP reported.
The US campaign against al-Qaida in the Arabian Peninsula is heavily dependent on using drone strikes to take out terror targets. Obama has held up that approach as a model for the military mission against the Islamic State group in Iraq and Syria, which relies on airstrikes instead of US ground troops.

Obama, who is traveling in India, said that approach "is not neat and it is not simple, but it is the best option we have."

"The alternative would be massive U.S. deployments in perpetuity, which would create its own blowback and cause probably more problems than it would potentially solve," Obama said during a joint media appearance with Indian Prime Minister Narendra Modi.

The president said that while he was concerned about the fragility of Yemen`s central government following the resignation last week of the US-backed president and Cabinet, the country "has never been a perfect democracy or an island of stability."

McCain, the new chairman of the Senate Armed Services Committee, accused the administration of being "delusional" in thinking that its strategy in the Middle East was working and said Iran was "on the march." The Shiite rebels, known as Houthis, who now control Yemen`s capital of Sanaa are widely believed to be backed by Iran, though they deny having any support from the Islamic republic.

"We need more boots on the ground," said McCain, R-Ariz. "I know that`s a tough thing to say, and a tough thing for Americans to swallow. But it doesn`t mean the 82nd Airborne. It means forward air controllers. It means special forces, it means intelligence, and it means other capabilities."

Feinstein, the top Democrat on the Senate Intelligence Committee, said she agreed that more special operations forces are necessary. She also said the U.S. needs more human intelligence in the region instead of relying so heavily on intelligence gathered by technical means.

The California Democrat said that while Americans "don`t want another war," she believes it is time "to look more deeply and broadly into what we`re doing and how we`re doing it." She said the US must also do more to protect US partners in the region, including Israel, Jordan and Saudi Arabia.

House Speaker John Boehner, R-Ohio, and Senate Majority Leader Mitch McConnell, R-Ky., said Sunday they expect that Congress won`t try to prohibit ground troops in upcoming legislation authorizing U.S. military force against Islamic State militants in Iraq and Syria. Obama has called on Congress to pass such a measure, and GOP leaders have agreed. But administration officials also have said Obama won`t send combat troops to Iraq or Syria, while Gen. Martin Dempsey, the top uniformed military officer, said at some point he could recommend that.

"I don`t want to limit the president`s ability to take on the terrorist threat directly," Boehner told CBS` "60 Minutes."

Yemen is home to al-Qaida in the Arabian Peninsula, which the US views as the global terrorist network`s most dangerous branch. The group has been linked to numerous failed attacks on the U.S. and claimed responsibility for the attack on a Paris satirical magazine this month.

Obama has relied heavily on drone strikes to take out terror targets in Yemen. There were 23 US drone strikes last year and 23 the year before, according to Long War Journal, which tracks the strikes based on local media reports.

The US military also has trained elite counterterrorism units of Yemen`s military that have battled al-Qaida.