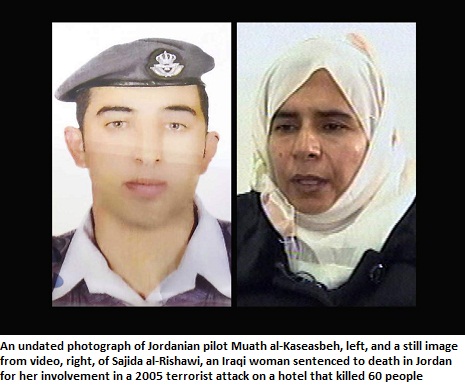 ISIS released a message late Wednesday purportedly by Japanese hostage Kenji Goto, extending the deadline for Jordan
The audio was released as Jordan had offered a precedent-setting prisoner swap to ISIS in a desperate attempt to save a Jordanian air force pilot the militants purportedly threatened to kill, along with Goto.

The audio recording, in English, says the Jordanians must present Sajida al-Rishawi at the Turkish border by sunset Thursday, or Jordanian pilot Mu’as al-Kasaseabeh will be killed.

The Associated Press could not independently verify the contents of the recording which was distributed on Twitter by IS-affiliated accounts.

On Wednesday, the pilot’s father met with Jordan’s king who he said assured him that “everything will be fine.”

King Abdullah II faces growing domestic pressure to bring the pilot home. However, meeting ISIS’s demand for the release of a would-be hotel bomber linked to al-Qaida would run counter to the kingdom’s hardline approach to the extremists.

Efforts to release al-Kaseasbeh and Goto gained urgency with the release late Tuesday of a purported online ultimatum claiming ISIS would kill both hostages within 24 hours if the al-Qaida-linked prisoner was not freed.

The scope of a possible swap and of ISIS’s demands also remained unclear.

Jordanian government spokesman Mohammed al-Momani said Jordan is ready to trade the prisoner, an Iraqi woman convicted of involvement in deadly Amman hotel bombings in 2005, for the pilot. Al-Momani made no mention of Goto.

Any exchange would set a precedent for negotiating with ISIS militants, who in the past have not publicly demanded prisoner releases. Jordan’s main ally, the United States, opposes negotiations with extremists.

The release of al-Rishawi, the al-Qaida-linked prisoner, would also be a propaganda coup for the militants who have already overrun large parts of neighboring Syria and Iraq. Jordan is part of a U.S.-led military alliance that has carried out airstrikes against ISIS targets in Syria and Iraq in recent months.

Participation in the alliance is unpopular in Jordan, and the capture of the pilot has only exacerbated such sentiments, analysts said.

“Public opinion in Jordan is putting huge pressure on the government to negotiate with the Islamic State group,” said Marwan Shehadeh, a scholar with ties to ultra-conservative Islamic groups in Jordan. “If the government doesn’t make a serious effort to release him, the morale of the entire military will deteriorate and the public will lose trust in the political regime.”

The pilot’s family, meanwhile, is increasingly vocal in its criticism of the government.

Several dozen protesters gathered Wednesday outside King Abdullah’s palace in Amman, urging the government to do more to win the release of the pilot.

“Listen, Abdullah, the son of Jordan (the pilot) must be returned home,” the protesters chanted.

The pilot’s father, Safi al-Kasaesbeh, was part of the group and was allowed into the palace, along with his wife, to meet Abdullah.

“The king told me that Muath is like my son and God willing everything will be fine,” al-Kasaesbeh said afterward.

Earlier, he criticized the government’s handling of the crisis.

“I contacted the Turkish authorities after I found that the Jordanian government is not serious in the negotiations,” he told The Associated Press. “The government needs to work seriously, the way one would do to free a son, like the Japanese government does.”

Jordan reportedly is holding indirect talks with the militants through religious and tribal leaders in Iraq to secure the release of the hostages.

In his brief statement, al-Momani only said Jordan is willing to swap al-Rishawi for the pilot, but not if such an exchange is being arranged. Al-Rishawi was sentenced to death for her involvement in the al-Qaida attack on hotels in Amman that killed 60 people.

In Tokyo, Goto’s mother, Junko Ishido, appealed publicly to Prime Minister Shinzo Abe. “Please save Kenji’s life,” Ishido said, begging Abe to work with the Jordanian government until the very end to try to save Goto.

“Kenji has only a little time left,” she said in a plea read to reporters. Ishido said both Abe and Japan’s main government spokesman had declined to meet with her.

Abe on Thursday did not make any direct reference to the latest video but reiterated his condemnation of the ISIS hostage-taking.

“The heinous terrorist act is totally unforgivable,” he said in Parliament in response to a ruling party lawmaker’s question.

Later, a few dozen people gathered outside the prime minister’s official residence, holding banners expressing hopes for Goto’s release. “I have been trying to keep my hopes up and believe that Mr. Goto will return. I have this faith within me,” said Seigo Maeda, 46, a friend of Goto.

The militants reportedly have killed a Japanese hostage, Haruna Yukawa, and the crisis has stunned Japan.

Muath al-Kaseasbeh, 26, was seized after his Jordanian F-16 crashed in December near ISIS’s de facto capital of Raqqa in Syria. He is the first foreign military pilot the militants have captured since the coalition began its airstrikes in August.

This is the first time the group has publicly demanded the release of prisoners in exchange for hostages. Previous captives may have been freed in exchange for ransom, although the governments involved have refused to confirm any payments were made.

Goto, a freelance journalist, was captured in October in Syria, apparently while trying to rescue Yukawa, 42, who was taken hostage last summer.

ISIS broke with al-Qaida’s central leadership in 2013 and has clashed with its Syrian branch, but it reveres the global terror network’s former Iraqi affiliate, which battled U.S. forces and claimed the 2005 Amman attack.